A look back at the murder of Jordan Manners

Jordan Manners was 15 years old when he was shot dead inside his North York school. Here's a look back at what has happened during the investigation.

May 23, 2007: Grade 9 student Jordan Manners, 15, is fatally shot in the chest in a hallway of his high school C.W. Jefferys Collegiate Institute. This marks the first time a student is shot and killed inside a Toronto school.

May 27, 2007: Two 17-year-old males are charged with first-degree murder in connection with the shooting. Some said they were friends with the victim. They will eventually be known to the media as J.W. and C.D. as their identities are protected under the Youth Criminal Justice Act.

June 2, 2007: A revision to the Safe Schools Act, making the legislation even more "progressive," is passed at Queen's Park.

June 5, 2007: Prominent human rights lawyer Julian Falconer is appointed to head the School Community Safety Advisory Panel. This panel was tasked with examining C.W. Jefferys and provide the board with suggestions on how to improve school safety in the city.

June 6, 2007: The province announces that more than 150 Toronto schools in "priority" neighbourhoods such as Lawrence Heights, Malvern and Jane-Finch will receive $4 million to keep recreation facilities open in summer in an effort to keep kids out of trouble. C.W. Jefferys is one of the locations to offer youth programs all summer long.

June 27, 2007: The principal and two vice-principals at C.W. Jefferys are put on home assignment with pay after the allegations surface that the three did not notify police after being told a 14-year-old female student was sexually assaulted in a school washroom in October 2006.

Aug. 29, 2007: An interim report by the school safety panel recommends that the TDSB conduct a safety audit of C.W. Jefferys.

Sept. 19, 2007: Four teenaged boys are arrested in connection with the sexual assault of the young Muslim student at C.W. Jefferys. Two more youths are named in arrest warrants and later charged.

Jan. 6, 2008: Former C.W. Jefferys principal Charis Newton-Thompson and vice-principals Silvio Tallevi and Stan Gordon are charged under Ontario's Child and Family Services Act. They were accused of failing to report an alleged sexual assault on a student.

Jan. 21, 2008: The TDSB launches a student safety hotline in accordance with the report's recommendation.

March 9, 2008: The hotline registers more than 316 calls. About 160 of those calls require a follow-up with school staff, social workers, police, children's aid or parents.

March 25, 2008: The province steps in with cash to help make high schools safer. Ten million dollars is set aside in the Ontario budget for urban schools located in at-risk neighbourhoods.

May 8, 2008: Charges against Newton-Thompson, Tallevi and Gordon are dropped on a technicality.

May 16, 2008: A school safety panel report is released. It condemns the school's former principal Newton-Thompson for not doing enough to help protect a 14-year-old girl who was victimized at the school. Newton-Thompson later said he "dropped the ball."

May 21, 2008: The school board takes action to hire a more diverse staff, more support staff and to provide hall monitors and a safe space for young women. They also vow to strengthen relations with local police, improve security around the school and crack down on sexual harassment between students.  About $5.5-million is allocated to making schools safer.

Sept. 2008: Police station officers in 27 schools across the city as part of an agreement with the TDSB and the TCDSB. However, C.W. Jefferys is not on the list.

Feb. 3, 2010: Trial begins for the two young men who were charged in connection with the murder. They both pleaded not guilty.

March 26, 2010:  A mistrial is declared after the jury is unable to reach a verdict. During the trial, two key witnesses recanted their statements to police.

April 1, 2010: The court decides that the two men will stand trial for a second time in January 2011, though that date will eventually be delayed until March.

March 22, 2011:  A gym teacher testifies he saw Manners lying on the floor of the hallway with a wound in his chest. The boy was struggling to remain conscious, he said .

April 20, 2011:  A witness accused police of backtracking on their promise to keep her anonymous.

May 9, 2011:  One of the accused takes the stand and says he was in the cafeteria when Manners was shot.

May 19, 2011:  After less than two days of deliberations, the jury finds both men not guilty of the charges. The Crown tells reporters afterwards that he will not appeal the decision. 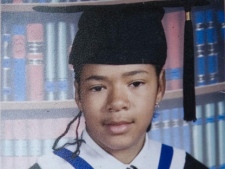 Jordan Manners was killed inside C.W. Jefferys Collegiate Institute on May 23, 2007.