TORONTO - Background checks and licences for children's entertainers aren't in the cards anytime soon in Ontario.

Premier Dalton McGuinty says it's up to parents to make sure their kids are safe around entertainers such as clowns.

His comments are in response to calls from a Brampton, Ont., woman who is urging legislation be brought in for such performers.

Linda Beaudoin says anyone working as a children's entertainer should have a criminal-background check and a licence.

She has been pushing for the legislation for more than a decade after she began working as a clown herself and realized nobody checked her background.

The Ottawa-born woman says she was abused as a child. She said she left home at 15 before taking on a variety of jobs, including exotic dancing.

Children's entertainers -- clowns, magicians, Santas and other characters -- can go into family homes and have access to kids, while parents often know very little about them, says Beaudoin.

But McGuinty, who has been accused by government critics as having a "father knows best" outlook, said he had no plans to licence the performers.

"It's not something that we're looking at at the present time but I would encourage parents to use their good judgment when it comes to these kinds of things," McGuinty said. 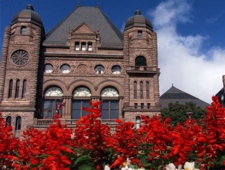