MONTREAL - Air Canada could face its second work stoppage this year after flight attendants overwhelmingly endorsed a strike that could begin as early as next week.

The Canadian Union of Public Employees said Tuesday that after a 10-day vote, employees voted 98 per cent to back a strike.

Unless a last-minute deal is reached, 6,800 flight attendants could walk off the job next Wednesday, Sept. 21.

The head of the Air Canada component of CUPE said no one wants a strike.

"We're ready to be at the bargaining table and we want a fair deal for the flight attendants but if we have no other alternative then that's what we're going to do," Jeff Taylor said in an interview.

The union has been negotiating with the Montreal-based airline since Sept. 1 after an earlier deal was rejected by flight attendants in a ratification vote.

"We have been passing ideas back and forth but it's slow."

The union must give 72-hour notice before launching a strike at Canada's largest air carrier, which operates across the country and has major continental and international routes.

Taylor declined to say if the union will opt to take steps just short of a full strike, such as work-to-rule.

The airline said Tuesday it would implement "a partial schedule including codeshare flights operated by its partner airlines" should flight attendants go on strike.

In the meantime, Air Canada said it's "business as usual" and that its customers can continue to book Air Canada flights with confidence.

About 3,800 customer sales and service representatives represented by the Canadian Auto Workers union held a three-day strike in June. However, they were legislated back to work by the federal government.

Analysts believe a strike by thousands of in-flight workers would have an impact on operations and likely prompt the federal government to either block a strike or end one quickly.

"I think it would be a much more challenging situation than it was with the customer service agents because part of the flight attendant's role is the safe operation of the aircraft," Chris Murray of PI Financial, said in an interview.

"You may be able to operate some of the fleet, but not all of it."

The union urged the government once again not to intervene in a strike.

"If we go by what happened that's a definite reality but we're hoping that they won't step into place and just let the bargaining process unfold," Taylor added.

But federal Labour Minister Lisa Raitt tabled back-to-work legislation two days into the CAW strike saying the government wouldn't tolerate any disruption to the public or impact on the economy.

The two sides hammered out a deal before the legislation was passed, but sent the contentious issue of requiring new hires to join a defined contribution pension plan - instead of the more expensive defined benefit system -- to an arbitrator.

Murray suspects any strike now would be short-lived, if it gets that far.

"I think they still have some time to go back to the table and come to a tentative agreement."

That presents a "curious situation" that highlights the challenges Air Canada faced in negotiating a deal that can win employee support.

Under the worst-case scenario, the government could send the dispute to binding arbitration.

"All employees at Air Canada are really unhappy. They've been giving up concessions within the company for the last 10 years to make the company profitable and they just want to be recognized," he said.

"I don't even thing they want to be greedy, they just want to be recognized, they want to have good working conditions and a relatively decent pay and the company just doesn't seem to want to be bargaining that way."

Canada's largest airline and its regional partners carry about 31 million passengers annually to more than 170 destinations on five continents.

On the Toronto Stock Exchange, Air Canada shares set a new 52-week low, closing down five cents, or three per cent, to $1.60 in Tuesday trading. 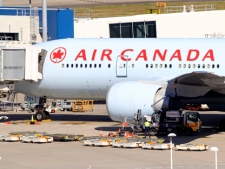 An Air Canada Boeing 777 sits at a gate after it was forced to return to Sydney Airport in Sydney, Thursday, July 28, 2011, after crew members saw smoke coming from an oven in the galley. No one on Flight AC34 was injured in the incident, which forced the pilot to dump fuel before safely landing. (AP Photo/Rick Rycroft)