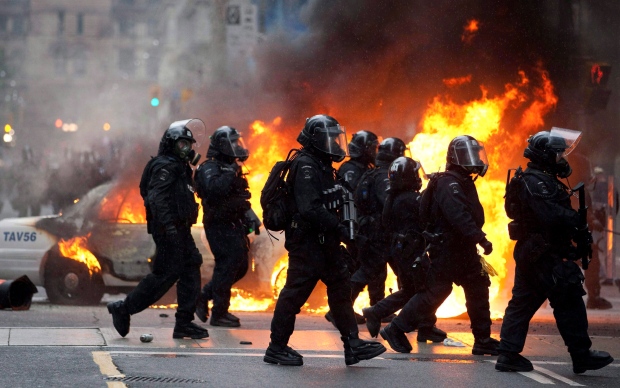 A 27-year-old American man faces more than two dozen charges in connection with alleged actions which caused an estimated $400,000 worth of damage during the G20 Summit in Toronto nearly three years ago.

Police say a man from New York City returned to Canada – where he was wanted on a Canada-wide warrant - from the United States voluntarily, surrendering to police Tuesday.

Police allege that a man:

- Used a hammer to smash the windows of a police vehicle, while an officer was inside, near Queen Street West and Spadina Avenue.

- Smashed the windows of both a Starbucks and Subway located on Queen Street West.

- Threw a rock at a line of police officers.

- Threw a rock through a window of a TD Canada Trust branch located on Bay Street, injuring a security officer and customer.

- Along with two other suspects, used a metal street sign to smash a window at The Carlu on Yonge Street.

- Smashed windows at a Starbucks located on Yonge Street.

A suspect, identified by police as Joel Saleem Bitar, faces charges including assault of a police officer with a weapon, two counts of intimidation of a justice system participant by violence, five counts of mischief endangering life and 13 counts of mischief over $5,000.