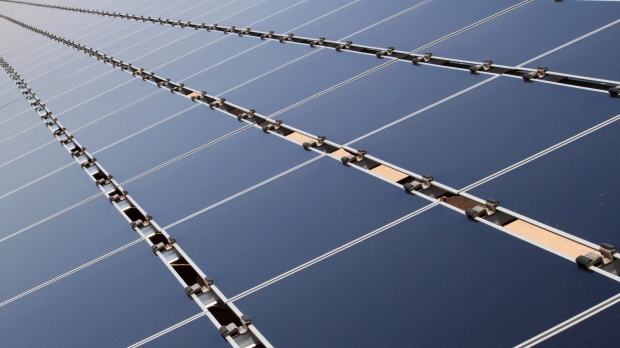 Some of the 30,000 solar panels that make up the Public Service Company of New Mexico's new 2-megawatt photovoltaic array in Albuquerque, N.M. on April 20, 2011. THE CANADIAN PRESS/AP-Susan Montoya Bryan

CALGARY - Provincial regulators have approved a $500-million solar power project in southern Alberta that its developers say will be the largest in Canada.

Privately held Greengate Power Corp. of Calgary says approval from the Alberta Utilities Commission means it can proceed with construction next year of its Travers Solar project, with full commercial operations targeted for 2021.

The electricity facility is to generate as much as 400 megawatts at peak times, enough to supply more than 100,000 homes.

The AUC says in its ruling that no parties opposed construction of the project in Vulcan County, about 120 kilometres southeast of Calgary.

It says it is to utilize 2.5 million photovoltaic solar panels erected on about 1,600 hectares of mainly cultivated cropland.

Greengate also developed the 300-MW Blackspring Ridge Wind Project, located about 10 kilometres from the Travers project, which is now owned by French firm EDF EN and Enbridge Inc. of Calgary.