Arden booted off train for bringing dog on board

OTTAWA - Jann Arden says she was kicked out of a Via Rail train "in the middle of nowhere" because she brought her tiny dog, Midi, on board.

The singer-songwriter says she was asked to leave the train in Oshawa, Ont. on Sunday morning after Via staff noticed the sleeping dog.

Arden says she spent four and a half hours in Oshawa before renting a car to get to Ottawa where she was to perform at the National Arts Centre that night.

The outspoken artist complained about the incident on Twitter, writing "VIA--Rail you guys suck...a four pound dog in a bag and you boot me off in the middle of nowhere? Nice...."

A Via spokesman tweeted back saying the company was sorry for the "unfortunate situation," but added their staff should have flagged it before the train left the station.

Via says on its website that pets, with the exception of guide dogs, are not allowed in passenger cars. They must travel in the baggage car aboard trains that offer checked baggage service.

Many people joined Arden's thread on Twitter, but not everyone was sympathizing with the singer.

One poster's tweet read "Rules are there for a reason, my 4 yr old is allergic, wld suck if she were sick bc of a dog."

Another one read, "Funny. The rules about no pets applies to everybody. Why are you crying?"

Others were more understanding.

"I think Midi is adorable. Did the person booking your tix not check via's policies in pets? I did. They're pretty clear" wrote another person, to whom Arden replied "we didn't think to do it ... I didn't book the ticket... my agent feels terrible." 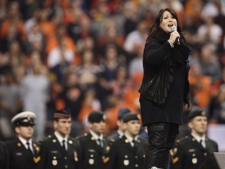 Jann Arden performs the national anthem before the CFL's Grey Cup game, between the Winnipeg Blue Bombers and B.C. Lions, on Sunday, Nov. 27, 2011, in Vancouver. (THE CANADIAN PRESS/Darryl Dyck)