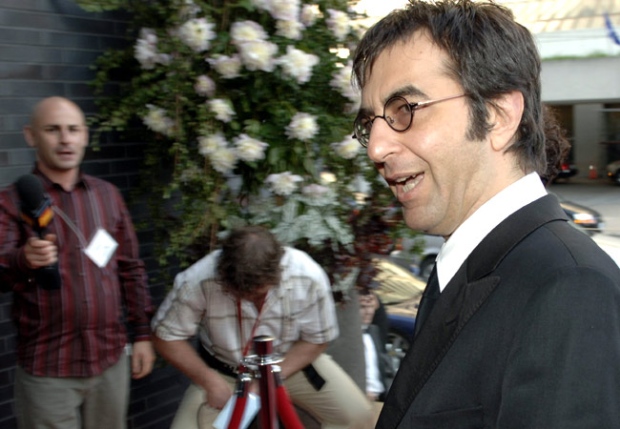 Atom Egoyan arrives at the gala opening of the Four Seasons Centre for the Performing Arts in Toronto on Wednesday, June 14, 2006. (Aaron Harris / THE CANADIAN PRESS)

"I'm reading through the inevitable two sex thrillers a day I get sent from my agent in L.A. because now I'm the guy who does that type of (film)," Egoyan said in a recent interview to promote the release of "Chloe" on DVD Tuesday.

"Which is just disheartening in a way, because they're all terrible. But I'm writing."

"Chloe" was written by "Secretary" scribe Erin Cressida Wilson and is based on the 2003 French film "Nathalie."

It centres on the marital insecurities of a successful doctor, played by Julianne Moore, who suspects her husband of cheating and hires a call girl named Chloe, played by Amanda Seyfried, to test his fidelity.

It's not long before a sultry relationship unfolds between the two women, leading to a hotel-room tryst and a violent conclusion.

Salacious elements aside, Egoyan says this tale of infidelity, deceit and obsession possesses a depth that sets it apart from other sex thrillers.

"And yet the scripts I get from that system, like I say, are not very interesting to me. They don't have the psychological complexity of a script like 'Chloe' did," says Egoyan.

Still, the Toronto-based auteur, whose acclaimed body of work includes "Exotica" and "The Sweet Hereafter," admits there may be a prurient appeal to "Chloe" that bodes well for its search for a new audience on DVD.

"It's in some ways, I think, a film that might be even better viewed in private," he says laughing.

"Chloe" was met with mixed reviews when it was released earlier this year to theatres, but was generally regarded as Egoyan's most accessible work yet. He ascribes that in large part to its linear storyline, something that he says runs counter to his own instincts as a writer.

Nevertheless, he says he is attempting a more straight-ahead tact on his latest script.

"I'm a writing a thriller, a psychological thriller. And I'm trying to keep it more linear but we'll see how that works," he says.

"I'm very aware of the fact that if you want to get a certain type of funding then the story has to be more accessible and I'm trying to wrestle with that issue. Because I know I can make films in a certain way and that's been really gratifying for me but it's also nice to story-tell, or create a story like 'Chloe,' which is able to be accessible to a wider public. The question as always is: How do you do that without compromising your own voice?"

Amid this question, Egoyan is also working on several other projects.

They include the media installation "8 1/2 Screens" to celebrate the opening of the TIFF Bell Lightbox, the new home of the Toronto International Film Festival, on Sept. 12.

And he's reworking "Salome" for the Canadian Opera Company, roughly 15 years after mounting a modernized take on the Richard Strauss opera for the COC. The new version is being prepared for 2012.

"That production was very much concerned with the technology of that time and the way surveillance was sort of working in society at that moment," says Egoyan.

"But I think that it's been so radically altered so there's a way of talking about that."

"Chloe" comes out on DVD on Tuesday.