Bell Canada is donating $10 million to the Centre for Addiction & Mental Health, making it the largest corporate donation ever to mental health services in Canada.

The multimillion-dollar donation puts CAMH over its $100 million fundraising goal as it explores ways to better treat individuals and families coping with mental illness.

George Cope, president of BCE and Bell Canada, announced the donation at a press conference Wednesday, describing it as a proud moment for Bell and CAMH, and a new era for mental health in Canada.

"When we step back and look at Bell we say, ‘What have we done for the community?'" Cope said. "If we are going to spend shareholder money in the community, how can we make the biggest impact?"

The campaign will fund the construction of new state-of-the-art hospital buildings designed to improve access to care, enhance recovery and offer innovative programs. The central entry point will be named the Bell Gateway Building.

Laurel Broten, Ontario's minister of children and youth services, said the campaign and the support of Bell Canada will go a long way to transform the lives of families with mental health challenges.

"Every time we show compassion for those with mental health issues we reduce the stigma to the barrier of getting help," Broten said.

With a contribution of $50 million, the Bell Mental Health Initiative is the largest corporate program supporting mental health in Canada.

One in five Canadians will experience a mental illness or addiction in their lifetime, according to statistics provided by CAMH.

Mental illness is the No. 1 cause of workplace disability in Canada. Every day, 500,000 Canadians are absent from work due to mental illness and addictions, costing the economy about $51 billion annually, the CAMH said.

CAMH is Canada's largest mental health and addiction teaching hospital, and one of the world's leading research centres.

CP24 is a division of Bell Media, which is owned by BCE Inc., Canada's largest communications company. 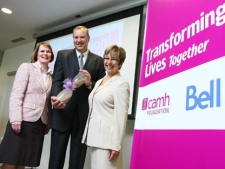 Darrell Gregersen, left, President and CEO of the Centre for Addiction and Mental Health Foundation, and Dr. Catherine Zahn, right, President and CEO of CAMH, present George Cope, President and CEO of Bell and BCE Inc., with a hand-blown hourglass containing crushed brick from a torn-down CAMH building, Wednesday, May 11, 2011, in Toronto. Bell's $10 million gift is the largest corporate donation to mental health in Canada, bringing CAMH's Transforming Lives Campaign to a historic high of $108 million. (The Canadian Press Images PHOTO/CAMH Foundation)