TORONTO - A visit from Bob Barker may have been the final push needed to convince Toronto officials the city's three elephants should be sent to a sanctuary in a warmer climate.

The retired game show host's trip to Toronto on Friday had city councillor Raymond Cho rethinking his position on whether to vote in favour of sending elephants Toka, Thika and Iringa to a sanctuary in the United States.

Cho, who is on the Toronto Zoo's management board, had been worried that moving the popular pachyderms would affect ticket sales at the financially strapped zoo.

But Cho said the former star of "The Price is Right" and longtime animal activist eased his concerns by saying other zoos that have shuttered their elephant exhibits did not see lower attendance.

"I was more on the side of preserving the elephants (in Toronto) before, but I think I'm moving more towards the centre," Cho said after several councillors met with Barker at City Hall. "So I don't know what will happen at the next board meeting,"

Barker, 87, was in Toronto with experts hoping his star power will convince the zoo's management board that the city is too cold for elephants and that the animals would be happier in sanctuaries in warmer climates in California or Tennessee.

"I think that they will be far healthier at the sanctuary, I won't hesitate to say that, because they do have foot problems and they have arthritis, and arthritis in (Toronto's) climate is undoubtedly pretty painful and causing great suffering," Barker said. "I'm really encouraged that (Toronto is) going to do the right thing for the elephants and for the zoo . . . the obvious answer is to move them down to a sanctuary where they'll live the best possible life that a captive elephant can live."

The Toronto Zoo's management board has come to terms with the fact that its elephant facilities are too small, where the animals live in tight indoor quarters measuring 37 square metres for eight months of the year. Four elephants have died in the zoo in the last five years.

The zoo will release a study in the next few weeks with recommendations on whether to close the elephant exhibit altogether or spend $40 million it can't afford on upgrades.

Cho and other councillors said informal polls of voting members indicate a majority would be willing to shut down the elephant exhibit in a May 12 vote.

An upgrade might not be enough for the elephants, who need a minimum of about 30 square hectares of land to walk each day in order to prevent potentially painful foot infections that can spread throughout the body, said Keith Lindsay, a researcher with the Amboseli Elephant Research Project in England who was with Barker in Toronto.

"If you made people stand around in a cupboard -- which is basically the elephant equivalent-- they would develop limb and foot problems," he said, explaining that elephant feet are designed for walking on soft and muddy soil that can better absorb the pressure of their weight.

City councillor Shelley Carroll, who does not have a vote on the zoo's board of management, said the facility has plenty of available space, but it would cost hundreds of millions of dollars to provide a large domed enclosure for the elephants to roam free indoors during the winter.

"A municipal interest is not going to come up with the amount of money to fool the environment over this amount of distance into thinking its closer to the equator," she said.

Barker has spent more than $1.5 million in his own money to transfer other elephants. He said he's willing to help pay for the Toronto elephants, though he wouldn't say how much he would spend.

It would cost about $100,000 to load up Toka, Thika and Iringa onto California-bound trucks, which is much more economical than the between $60,000 to $100,000 to maintain an elephant at a zoo each year, said Ed Stewart of the PAWS sanctuary in San Andreas, California.

Activists from Zoocheck Canada want Toronto's exhibit replaced with an interactive science-centre type display called the Elephant Labyrinth to include videos and activities for children. They can be changed to provide return visitors with a different experience each time and would be more educational than looking at elephants stand around in an enclosure, Zoocheck argued.

The group added that the Labyrinth would cost $15 million, much less than the $40 million upgrading price tag, and would be the first of its kind in the world.

Barker has reached out to Canadian elephants before.

Last month, he offered the City of Edmonton $100,000 to ensure its lone elephant, Lucy, got a second medical opinion with experts chosen by Zoocheck Canada for her breathing problems. The city turned the offer down, saying it has its own experts.

Animal rights groups have pleaded with Edmonton to send Lucy to a sanctuary, but the city argues moving the animal could kill her. 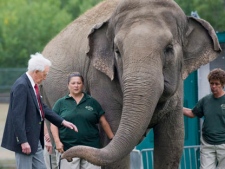