CANNES, France - Terrence Malick lived up to both his public and professional reputation Monday at the Cannes Film Festival, remaining out of sight while premiering a film that left crowds buzzing over its thematic scope, emotional depth and visual grandeur.

The notoriously press-shy Malick was nowhere to be seen after "The Tree of Life," the writer-director's long-awaited epic drama of creation and one family's place in it, screened for critics and reporters ahead of its official festival premiere.

The film starring Brad Pitt, Sean Penn and Jessica Chastain drew a scattering of harsh, prolonged boos, answered by enthusiastic applause from others at the press screening.

Debuting in U.S. theatres May 27, "The Tree of Life" is only Malick's fifth film in a nearly 40-year career, and his first at Cannes since 1979's "Days of Heaven," which earned him the festival's directing prize.

Malick has stayed behind the scenes for his subsequent films, 1998's "The Thin Red Line" and 2005's "The New World," and he skipped the Cannes press conference that followed Monday's screening, leaving Pitt, Chastain and his producers to face reporters.

"Mr. Malick is very shy, and I would say that I believe his work speaks for itself," producer Sarah Green said.

Pitt compared Malick's attitude toward publicizing a film to building a house.

"I don't know why it's accepted that people who make things in our business are then expected to sell them, and I don't think that computes with him," said Pitt, also a producer on the film. "He wants to focus on the making of it, not the real estate, selling the real estate. It is an odd thing for an artist to start something and then be salesman."

Penn, who had been travelling to Cannes from Haiti, missed the press conference but was on hand for the film's evening premiere.

"Terry Malick is a visionary," Penn, who also costarred in "The Thin Red Line," said before heading into the premiere. "A quite extraordinary individual."

Pitt was joined on the red carpet before the premiere by romantic partner Angelina Jolie. Jolie and Pitt signed autographs and shook hands with the festival's celebrity watchers, who cheered and shouted as the two stars strutted the red carpet.

Cannes organizers had hoped to debut the film a year ago, but it was not ready.

Malick's producers said the form of the film did not change dramatically in the last year. The director just needed more time.

"If you believe that movies are alive and talking back to you, there's a point at which it's very obvious they're not finished," said producer Dede Gardner.

"The Tree of Life" stars Pitt as a loving but sometimes brutally stern father, with Chastain the wife who stands as a figure of grace for their three confused, intimidated sons. Penn plays the eldest son as a grown man, reflecting on the people and moments that shaped him.

Malick is known for making films that defy classification, with a free-flowing narrative style forming the backbone for far-flung explorations of the meaning of existence.

"The Tree of Life" had a dense script, but Malick left each day of shooting loose and open so he could explore whatever chance might send his way, his collaborators said.

"He never wanted to, what we call, hammer-and-tong a scene as it's written," Pitt said. "He was more interested in capturing what was happening on the day. He's like a guy standing there with a butterfly net and waiting for that moment of truth to go by."

Chastain recalled one such instance of spontaneity that made it into the film, "where a butterfly lands on my hand. It's not in the script. We didn't put anything on my hand to make it land there. It's because he creates a set where he allows for those moments to happen."

The richly personal drama is told in a vast reach of impressionistic exchanges and images: from breathtaking views of the universe's creation to primordial scenes in the age of the dinosaurs to tender and terrifying family moments.

The dreamlike images are accompanied by poetic voiceovers as characters ponder the universe, wonder if God exists and offer small pleas or questions to him.

"Lord, why? Where were you?" Chastain's character laments after tragedy strikes. "Who are we to you? Answer me."

The film points up how little what we do on Earth really matters in an eternal universe, yet simultaneously stresses that our finite lives matter all the more against that unknowable infinity.

Some at Cannes found it all deeply moving. Others said Malick went over the top as some cosmic sequences play on for 15 minutes or more without a human face to be seen.

The range of reactions might suit Malick just fine.

"One of the reasons Terry maybe shies away from forums like this is that he wants the work to stand on its own. He doesn't want to say what it's about or whether it's autobiographical or not," said producer Bill Pohlad. "He just wants the audience to bring their own thing to it ... as opposed to him interpreting it or verbalizing it." 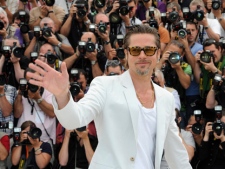 Actor Brad Pitt waves during a photo call for The Tree of Life at the 64th international film festival, in Cannes, southern France, Monday, May 16, 2011. (AP Photo/Jonathan Short)