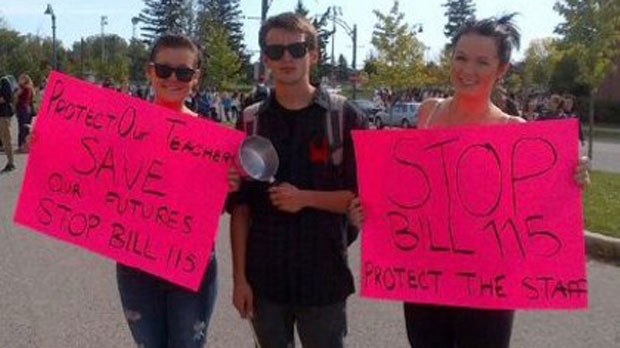 The students from Bowmanville High School and Clarington Secondary School protest Bill 115 in the town of Bowmanville on Friday, Sept. 21, 2012. A number of similar protests took place in and around the Greater Toronto Area. (Melissa O'Leary)

BRAMPTON, Ont. -- Students from two Brampton high schools staged a joint protest Friday over the loss of after-school programs across the province.

Teachers at many schools have been boycotting extracurricular activities following passage of legislation forcing a new contract on them and limiting their right to strike.

Around 300 students from Louise Arbour Secondary and Harold Braithwaite Secondary protested at an intersection calling for a repeal of the bill and saying that no extracurricular activities will mean no scholarships for some students.

One of the organizers -- Louise Arbour Secondary senior Indervir Kooner -- says the main reason he and his friends are out protesting is to get rid of the new legislation.

Kooner says teachers are like family to students, and if they're affected, the students are affected.

The students -- members of Brampton Students United -- say the protest is also about the democratic right to protest, which they say has been stripped away from teachers.

Japjeet Kaur, a student from Louise Arbour Secondary, said teachers are not able to have their say anymore.

"This is our chance to stand up for them," she said.