TORONTO - A former Ontario attorney general facing criminal charges in the death of a bicycle courier declared his innocence Wednesday as family and friends of the cyclist mourned a man who they said was trying to put a troubled past behind him.

Michael Bryant, 43, also stepped down as CEO of Invest Toronto, a brand-new corporation tasked with attracting investment to the city.

"Let me be clear: I am innocent of the very serious accusations made against me," he said in a letter to his boss, Toronto Mayor David Miller.

"I do not believe, however, that I can continue in this position on account of the circumstances of the past two days."

Bryant, who was once considered a top contender to succeed Premier Dalton McGuinty, was charged Tuesday with criminal negligence causing death and dangerous operation of a motor vehicle causing death.

The Harvard-educated lawyer, who served as Ontario's youngest attorney general, announced his departure from politics in May to take the high-profile job at Invest Toronto.

During his 10 years at the provincial legislature, the father of two also served as minister of aboriginal affairs and minister of economic development.

A source close to Bryant said the former minister "understands the gravity" of the situation.

"He is as shaken and rattled as anybody else would be in the same circumstances," the source told The Canadian Press.

Bryant has not spoken publicly since he made a brief statement Tuesday expressing his condolences to the family of Darcy Allan Sheppard, the 33-year-old cyclist who died Monday.

Navigator Ltd., a Toronto-based public relations firm, has been responding to media requests on Bryant's behalf.

Miller, who is also chairman of Invest Toronto, called Monday's incident "tragic and sad on many levels" as he accepted Bryant's resignation.

"My condolences remain with the family and friends of Darcy Allan Sheppard. My thoughts are also with Mr. Bryant and his family at this difficult time," he said in a statement.

Police say Sheppard grabbed onto a car Monday night in Toronto's tony Yorkville district following an altercation with the driver.

The driver drove away with Sheppard hanging on. He then fell and suffered fatal injuries, police said.

Bryant was driving home that night from an anniversary dinner with his wife, Susan Abramovitch, sources have said.

He was taken into custody by police later that night and was released the next day after the charges were laid.

The provincial government, meanwhile, is taking steps to avoid any appearance of political interference in the case.

Attorney General Chris Bentley and his staff will not be involved in Bryant's case or take questions about it, said a source familiar with the situation.

Instead, public servants in the ministry will deal with the file and report to deputy attorney general Murray Segal directly.

The premier's office also distributed copies of McGuinty's comments about Bryant to Liberal caucus members on Wednesday, which some have interpreted as tantamount to a gag order.

The preparations came as conflicting reports emerged about what transpired in the hours leading up to the fatal encounter.

Police said they had contact with Sheppard in the hour before his death, when his ex-girlfriend called police just after 9 p.m. and told them Sheppard was at her home and refused to leave.

Officers arrived and escorted him away, according to police spokesman Const. Tony Vella.

Vella said there were no allegations of criminal activity, such as assault, and there was no indication he was intoxicated.

But Sheppard's on-again, off-again girlfriend Misty Bailey said Sheppard was drunk when he showed up at her door.

"I'll say he came over drunk, regardless. He rested and slept a bit then he insisted on (leaving) to go home," she said in an email to The Canadian Press.

She said she didn't ask him to leave.

"I would have loved for him to stay where I knew he was safe," she wrote.

Sheppard ended up in the back of a police cruiser and Bailey asked police to drive him home, but instead they let Sheppard go, she said.

Regardless of what transpired that night, Sheppard's death was "unjust," Bailey said.

Jodie Schlender, the mother of one of Sheppard's four children, said he spoke to her on Sunday about his problems with alcohol.

"He said he just realized he needed help and he was going to get it," she said in an interview from Hinton, Alta.

"He was going to get well."

Schlender, who parted ways with Sheppard in 2004, said she always had a feeling he would die on the harried streets of downtown Toronto.

"I spent five years checking the paper every day for news because I figured somehow I'd have to hear it in the paper," she said.

Their son, Andrew, turned five on Saturday and Schlender now has to explain to him the death of the father he never knew.

"He's going to be really missed," Schlender said, her voice faltering with emotion.

"I really hate the fact that his son never got to know him."

Hundreds of cyclists, some in suits, others in spandex, overwhelmed rush hour drivers on some of Toronto's busiest thoroughfares Wednesday evening to remember Sheppard and rally for more bike lanes in the city.

The cyclists rode to the spot where Sheppard, an aspiring comedian, was found and put down their bikes and sat in the middle of the street.

Nicolette Seregelly, Sheppard's courier colleague, bent down to light a candle at the mailbox that has become a memorial to Sheppard, now covered in messages written on courier notes, and surrounded by flowers, a case of Budweiser, and banners calling for increased bike safety.

"He's up there now, a comedian in heaven," said Seregelly, who added she's heard of major accidents, but never a death like Sheppard's. 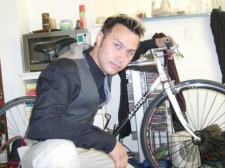 Darcy Allan Sheppard, a bike courier working in Toronto, was killed in a traffic incident, Monday, Aug. 31, 2009. Mr. Sheppard is seen in this image made available to CTV Toronto.