TORONTO - We seem to like big jackpots -- but our rush to dance with Lady Luck may be slowing a bit.

Friday's Lotto Max kitty has hit the maximum $50 million for the seventh time since the game of chance was launched last September. There are also 10 Maxmillions draws of $1 million each.

Canadians had snapped up $35 million worth of tickets for the draw, up 23 per cent over last week.

But Sarah Kiriliuk of the Ontario Lottery and Gaming Corp. said that is down slightly from the last time the jackpot topped out in June, when sales were about 28 per cent higher.

"Since we're hitting the $50 million jackpot so often, we are seeing a little bit of jackpot fatigue," said Kiriliuk.

"Sales are down just a little bit. But it's not a huge decrease. It's actually very marginal."

Kiriliuk expects Lotto Max will hit its maximum jackpot frequently in the future. The game is now more popular than Lotto 6/49, she said.

Some ticket buyers in Toronto said Friday afternoon they like the bigger jackpots because they trigger the extra Maxmillion draws -- and more chances to strike it rich.

"I love them, especially when they have the Maxmillions," said computer programmer Shannon Loukas, 27, who buys tickets together with two co-workers.

"It's a good chance. Your money goes a little bit farther hopefully."

Administrative assistant Lynda Doiron, 56, only buys when there's a big jackpot because "they're more exciting."

Doiron also plays scratch and win and says she's won $100 here and there.

Sylvia Thornton, 56, an administrative assistant, said she won $2,600 on Lotto 6/49 a few years ago but estimates she's spent double that since then on lottery tickets.

She actually thinks the Lotto Max jackpot should be lowered.

"I think $50 million is still high. I think they should have capped it at maybe $30 million and have the subsidiary prizes," said Thornton.

"Spread the wealth so to speak. $50 million is an obscene amount of money. I don't think anybody could manage that well."

Gretel Robinson said she buys tickets all the time but never wins. The university student feels it's still worth it though "because (the jackpot) raises very often and it raises a lot."

Clarence and Delores Durocher of Saskatchewan won half of the $50 million Lotto Max jackpot on June 25.

Gerald Healey, his wife Winnie and Margi White, of Happy Valley-Goose Bay, N.L. won the other half of that jackpot.

In February, one ticket each in Quebec and B.C. split a $50-million Lotto Max draw while Marie Fontaine of Pine Falls, Man., won the $50-million jackpot last November.

No matter how many people buy tickets though, the odds of winning the main draw remain the same --one in 28.6 million. 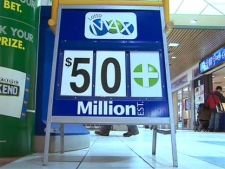