OTTAWA - A new poll suggests Canadians are roughly split over NDP Leader Tom Mulcair's contention that the Alberta oilsands have given the country a case of Dutch Disease as he prepares to visit the province next week.

Mulcair has suggested the Alberta oil exports raise the value of the Canadian dollar, which in turn hurts the economy in other parts of the country.

The phenomenon is dubbed the "Dutch Disease" in reference to the manufacturing decline that occurred in the Netherlands after a boom in natural gas exports in the 1970s.

The Canadian Press Harris-Decima survey suggests slightly more Canadians disagree than agree with Mulcair -- 45 per cent compared to 41 per cent -- although opinions varied across the country.

Most people polled in oil-rich Alberta and the rest of the Prairies disagreed with the NDP leader, while those in Quebec and British Columbia were most likely to agree with him.

The poll indicates most people don't share Mulcair's sentiments in Ontario, the country's manufacturing heartland, where the economy has been hard hit from the restructuring of the North American auto sector and other blue-collar industries.

But a study by the Canadian Energy Research Institute says Ontario enjoys the lion's share of oilsands benefits outside Alberta. The Calgary-based think-tank has suggested the oilsands will create billions of dollars in economic spinoffs in Ontario and tens of thousands of jobs over the next quarter century.

Ontario Premier Dalton McGuinty and his Alberta counterpart Alison Redford got into a spat earlier this year over the same issue. When McGuinty said a strong oilsands industry means a high loonie that hurts the manufacturing and export sectors, Redford accused him of being too simplistic.

But Mulcair has insisted that statistics on manufacturing job losses are "irrefutable"' and that "everyone" agrees more than half of those losses are the direct result of the artificially high Canadian dollar created by booming energy exports, particularly from Alberta's oilsands.

The federal Conservatives quickly pounced on Mulcair for suggesting the Alberta oilsands have given Canada a case of Dutch Disease. Cabinet ministers have accused the NDP leader of pitting region against region and insulting hard-working workers in the resource sector.

Mulcair's views have also angered Redford and Saskatchewan Premier Brad Wall. Redford has said she won't meet with Mulcair until he visits the Fort McMurray region to educate himself about the oilsands.

The NDP leader's office has confirmed Mulcair will visit the region May 30 and 31.

The poll suggests less than half of Canadians had heard about Mulcair's comments. People from parts of the country most involved in the oilsands told pollsters they were most aware of what he said.

"Our survey suggests that those who have the most to lose if oilsands development were to be slowed as a means to assist other economic sectors are the ones paying the most attention to the 'Dutch Disease' debate," said Doug Anderson, senior vice-president of Harris-Decima.

"On top of that, no region seems particularly convinced that oilsands development has been hurting exports of other sectors of Canada's economy."

There were few surprises along party lines.

The survey suggests 70 per cent of self-identified Conservative supporters polled either disagree or strongly disagree with Mulcair.

However, most Green party supporters also disagree with him -- with 56 per cent offside.

Liberal supporters were roughly split, with 48 per cent agreeing with Mulcair and 44 per cent disagreeing.

But the NDP leader's assessment was most popular with Bloc Quebecois supporters. The survey suggests 64 per cent of Bloc supporters back his musings. 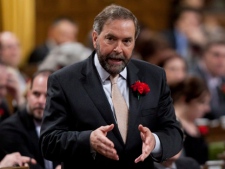 NDP leader Tom Mulcair speaks during Question Period in the House of Commons in Ottawa, Wednesday May 9, 2012. (THE CANADIAN PRESS/Adrian Wyld)