Canucks fans welcome at home arena for away games 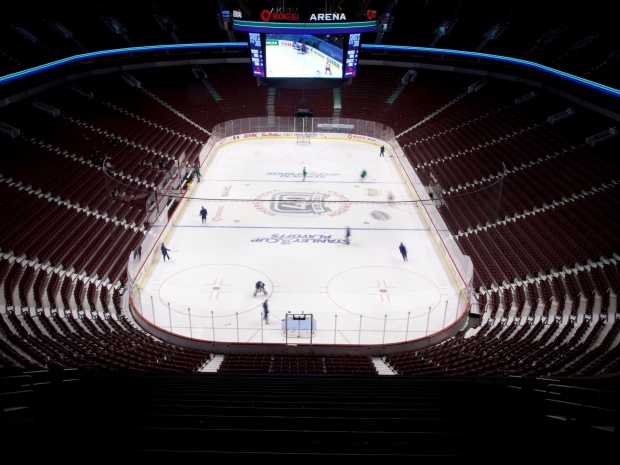 Members of the Vancouver Canucks are blurred as they take part in a team practice at Rogers Arena prior to game 2 of NHL Western Conference semi-final Stanley Cup playoff hockey action against the Nashville Predators in Vancouver, B.C., on Friday April 29, 2011. (THE CANADIAN PRESS/Jonathan Hayward)

VANCOUVER - Hockey fans will have a place to gather and watch the Vancouver Canucks during the Stanley Cup run, even when the team is out of town.

Canucks Sport and Entertainment head Victor de Bonis says Rogers Arena will be opened during away games, allowing fans to watch the action on the huge screen above centre ice.

De Bonis says the plan will work as long as there are no conflicts with events already scheduled for the downtown Vancouver arena.

As President's Trophy winners, the Canucks automatically have home ice advantage and will host games one and two of the Stanley Cup final.

Dates for the games will be set after the Eastern Conference battle between the Boston Bruins and Tampa Bay Lightning is decided -- with Boston leading the series three games to two, heading into game six Wednesday night.

Vancouver will vie for the Cup for only the third time in the team's 40-year history, thanks to a double-overtime goal on Tuesday from defenceman Kevin Bieksa, eliminating the San Jose Sharks with a 3-2 victory in Game 5.