Chances of surviving an overdose may depend on where person lives: advocate 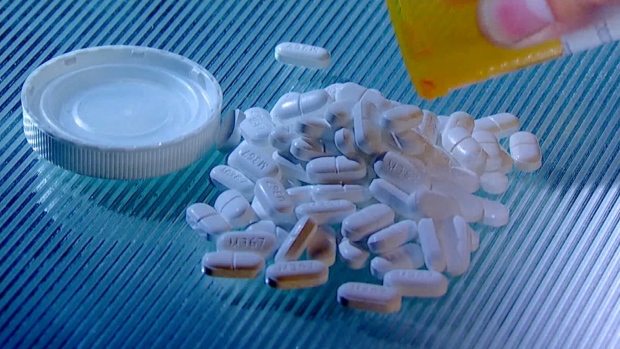 A judge in Oklahoma ordered pharmaceutical giant Johnson & Johnson and its subsidiaries to pay US$572 million for its role in the state's opioid crisis.

VANCOUVER -- The day after one of his closest friends died alone in his bedroom from an opioid overdose, Brandon Bailey started sharing his cellphone number across social media.

The recovered drug addict from Windsor, Ont., has a message for other users: If you're going to use, call me.

"I will come to you and make sure that you are safe," Bailey wrote in a Facebook post.

Bailey, who is also a member of the Windsor Overdose Prevention Society, said he's been frustrated by a lack of overdose prevention services like safe consumption sites in the city, and he wants to ensure the overdose-reversing drug naloxone is within arms reach for anyone at risk.

"We need to be doing something," he said.

The overdose crisis has devastated communities across the country and is being credited with slowing the progress of life expectancy, which had risen three years between 2000 and 2016.

Opioids killed an estimated 9,000 people between January 2016 and June 2018, according to the Public Health Agency of Canada. About 94 per cent of those deaths were deemed accidental and almost three-quarters involved the powerful opioid fentanyl.

But access to overdose prevention services vary geographically, prompting some advocates to say that a person's chances of surviving an overdose depends on where you live.

There are eight approved supervised consumption sites in British Columbia, nine in Ontario, six in Alberta, four in Quebec, and none elsewhere, according to Health Canada.

Supervised consumption sites allow people to use their drugs under medical supervision, many of which provide testing for fentanyl contamination and access to sterile equipment.

Naloxone is now available for purchase at pharmacies in every province and territory except Alberta, Yukon and Nunavut, the Canadian Pharmacists Association said.

Access to the free, take-home naloxone kits is more varied, with Quebec offering the nasal spray to anyone over 14 through pharmacies, New Brunswick giving naloxone to other sites like health and social services, and British Columbia offering free access to people at risk of overdosing, those likely to witness an overdose and to First Nations.

Jordan Westfall, executive director for the Canadian Association of People Who Use Drugs, said rural and remote areas are particularly underserved.

"There are large parts of the country that don't have these services pretty much at all. These are lifelines for people at risk of overdosing that aren't accessible to people," Westfall said.

A lack of education and political will have been the biggest challenges to preventing overdose deaths, he said. Unlike other health-care decisions that are based on data, the question of allowing services like supervised consumption sites is often put before the public, he said.

"In a lot of cases, we've put human lives up for public consultation. That's kind of a metaphor for how we treat the health care of people who use drugs, which is stigmatized in society," Westfall said.

He said harm reduction could go further by providing a safe drug supply to users, given that so many deaths appear related to drugs contaminated with fentanyl.

"Everybody else in the country, when they take a sip of beer they don't have to worry that they're going to drop dead. We need to see the same safety for everyone in the country using drugs on the streets," he said.

Vancouver's Downtown Eastside has been at the centre of the overdose crisis in British Columbia and it's also where some of the most accessible harm-reduction services are located.

Last month, Vancouver Mayor Kennedy Stewart announced he would direct staff to look for a site where drug users can get safe opioids to prevent overdoses.

Sarah Blyth, co-founder of the Overdose Prevention Society in Vancouver, said supervised consumption sites and naloxone save lives every day.

On the day of the interview, she said three people had already overdosed at a nearby safe injection site but they survived because they were surrounded by people who understood drug use and overdose prevention.

But Rebecca Jesseman, policy director for the Canadian Centre on Substance Use and Addiction, said there are some good reasons for variation in available services: dominant drug problems also vary geographically.

The opioid crisis is more pronounced in British Columbia, Alberta, Ontario and Quebec, she said, while the central provinces of Manitoba and Saskatchewan are more concerned with fighting a methamphetamine problem.

"Part of the reason for different levels of response is the fact that the problem is different across Canada, so we do need to respond in a way that is specific to the local context," she said.

Health Canada said in a statement that the federal government allocates funding based on the severity of the opioid crisis and the population size in each province or territory.

But beyond geographic variations, she said services often fail to meet the needs of the individual, especially as they relate to language, gender, age and culture.

"The system often looks at people who need help as being treatment resistant, rather than looking at what is wrong with the system and how we can meet their needs," Jesseman said.

"We wouldn't accept this variation in service quality and availability for health conditions like cancer, diabetes and heart disease, so why is it the norm for substance use?"