Police say that on Jan. 19, a man left his 100-pound German shepherd dog outside when he went into a Vaughan convenience store.

Police say the girl and the man both required medical attention for their injuries and the woman's clothes were ripped, but she managed to avoid injury.

Vitalie Mazur is facing three counts of failing to prevent a dog from attacking a person under the Dog Owners Liability Act.

The dog was euthanized by Toronto Animal Services on Jan. 31 and Mazur is scheduled to appear in court in Newmarket, Ont., on March 11. 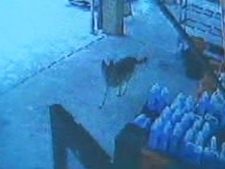 A dog runs freely in this security footage taken from a shop in Vaughan.