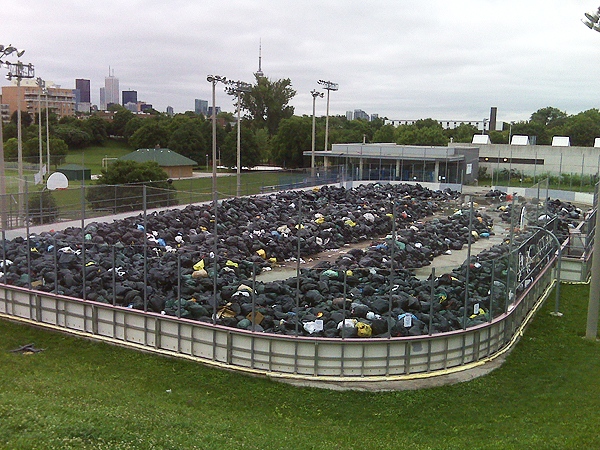 The temporary dump located at Christie Pits Park will close on Sunday night at 7 p.m., one of two that is shutting down as the City of Toronto announces the opening of two new locations.

The York Mills Arena dumpsite is slated to close at the end of the day on Friday.

The new sites are located at Centennial Arena Community Centre on Ellesmere Road and Wilket Creek / Sunnybrook Park, near Leslie Street and Eglinton Avenue. They opened at 3 p.m. Friday.

Murky water is accumulating in the outdoor arena at Christie Pits Park, which was one of the busiest of the city's temporary dump sites during the ongoing strike by 24,000 inside and outside municipal workers. The strike is now in its 12th day.

Residents near Christie Pits had been protesting near the dumpsite for days, most recently announcing plans to take water samples to a lab for testing.

The group had block a pest control contractor from spraying the area.

Boris Steipe, a University of Toronto biochemistry professor who lives near the park, says he is going to get water from the arena tested for its contents and the health risks it could pose.

"I personally think it will show most of the toxins and the feces from diapers and the medical residues that are expected," he says.

Police were at the dump site early this morning when striking city employees blocked a pest control crew from spraying the dump with various pesticides to control pests and odours.

Some residents - and protesters - have been at the entrance to the dump around the clock. The dump is chained and locked overnight.

Toronto's Medical Officer of Health, Dr. David McKeown told the Globe and Mail that the area needs to be sprayed to prevent the dump from becoming a health hazard.

Although the sites have been closed to new garbage, the trash currently contained in them will remain there until the end of the strike.

About 24,000 inside and outside municipal workers walked of the job June 22, bringing garbage pickup to a halt and closing city-run daycares, parks and recreation programs, swimming pools and ferry service.

A key issue for workers is pay for unused sick days, a benefit the city said it can no longer afford.

As the strike continues, constituents are asking their councilors for money back from the taxes they've paid, arguing that they're not getting their money's worth of services.

Toronto Don Valley East (Ward 34) councilor Denzil Minnan-Wong estimates the city has saved $28 million a week during the strike, based on an average worker's wage of $60,000 a year.

Minnan-Wong says that the city has had to spend money to keep some services running, but he thinks there could be cash left over.

"I can't for the life of me figure out how that much money could be spent," he says, referring to his estimate of nearly $30 million a week.

"There has to be some money left over."

But another councilor says it's unlikely the city will be saving money because it had to spend money on things like setting up temporary dump sites and paying water services managers to staff plants 24 hours a day, seven days a week - among other expenses.

"Right now, we're probably not saving anything because we're incurring costs that we otherwise would not have had to incur," says Eglinton-Lawrence Ward 16 councillor Karen Stinz.

She does say the city should certainly look at a reduction in the garbage levy, a fee charged for garbage collection.

Minnan-Wong says if money is left over in the city's coffers, residents may not even get any money back at all.

"We're going to have to see how much money is left after the strike, but we've got so many budget pressures...we're hundreds of millions behind, we may have to use some of (the money saved in the strike) for that."

The councilor also says he's asked city staff to provide a number of how much money is being spent during the week, but he has yet to receive an answer. The last strike that was 16 days actually ended up costing the city more money than it saved, he adds.

Meanwhile, the City of Windsor says it will be giving money back to taxpayers who are now into the 12th week of a strike by civic workers.

Helga Reidel, Windsor's general manager of Corporate Services, says taxpayers will have funds returned to them. It's not yet known how much will be paid back or how.