Police removed a barrel believed to contain a body encased in concrete from the Toronto harbour just before 1 p.m. Sunday.

Police divers discovered the barrel near Queen's Quay and Jarvis Street, near the Redpath sugar refinery. Police spokesperson Tony Vella won't say how they were led to the scene except to say they were acting on a tip.

The marine unit was called in to assist the homicide squad in pulling the extremely heavy barrel out of the water. It was transported to the coroner's office for examination.

Police won't confirm the gender of the person but they don't believe it is a child. They say they may know its identity but don't want to speculate until it has been proven. They say more information will be available within the coming days. 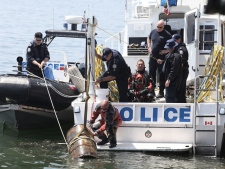