Conrad Black must stay in the U.S. for now; next court hearing Aug. 16

CHICAGO - Canada will be off-limits for at least three more weeks to the newly freed Conrad Black, who was told Friday he must remain on American soil despite a request to return to his native land in light of his wife's undisclosed health issues.

Black, 65, thinner than he was during the years he revelled in a life of riches, appeared before the same judge who convicted him of fraud and obstruction of justice charges in 2007 and sentenced him to six-and-a-half years in a federal prison.

Barbara Amiel, still looking the part of a well-heeled jet-setter in a grey tweed skirt, black cardigan and Chanel scarf, sat in the courtroom's front row as her husband's U.S. lawyer, Miguel Estrada, told Judge Amy St. Eve that her health was behind the request to return to Canada.

The couple's Palm Beach mansion "is not a suitable abode in her condition" in the blazing heat of a Florida summer, Estrada said. Its ownership is in a state of "flux," he added, suggesting the Blacks might soon be living in a New York City hotel.

St. Eve, however, said she needed more information about the former media tycoon's finances before she reconsiders his request to return to Toronto. She ordered Black back to court on Aug. 16, telling Estrada to provide her with more detailed information since there's so much "uncertainty" surrounding his client's finances.

Earlier this week, St. Eve barred Black from leaving the U.S. until she could pore over a financial affidavit. On Friday, she said some of the language in the document was too broad.

"I don't want this rushed because I want complete information," she told Estrada. "I need additional information ... to make a fully informed decision."

Prosecutor Julie Porter, meantime, argued that Black should have to remain in the United States pending an appeals court ruling on whether his 2007 fraud conviction should be thrown out. Black was convicted of defrauding Hollinger International Inc. of more than US$6 million.

Earlier this week, the 7th Circuit U.S. Court of Appeals granted Black's motion for bail following a U.S. Supreme Court ruling that narrowed the scope of the law used to convict him on the fraud charges. The decision didn't affect the obstruction of justice count.

The justices left it up to the lower court to decide whether the fraud conviction should be overturned. That decision could come in the next few weeks.

Amiel has reportedly lived in the couple's Palm Beach mansion, currently on the market, for most of her husband's incarceration at a federal prison in Coleman, Fla.

Once the house is sold, it's unclear where the couple would reside in the United States if Black is not allowed to return to the only home he still owns -- his posh estate in Toronto's Bridle Path neighbourhood.

The couple, holding hands, smiled broadly and nodded to familiar faces in the throngs of media as they entered and then departed the courthouse, but didn't make any comments. Black did, however, launch a death stare at a Canadian reporter who asked him if he now regretted giving up his Canadian citizenship.

Black gave up his citizenship a decade ago to become a member of Britain's House of Lords. He had to surrender his British passport to the court on Friday, although it expired last year.

The one-time media baron, wearing a blue pinstripe suit with a salmon-coloured tie, gave the thumbs-up sign as he arrived, but inside the courtroom, the couple spoke quietly with Estrada while awaiting St. Eve's arrival. They also whispered occasionally to one another; Black frequently smiled fondly at his wife.

A deferential Black was on his best behaviour in court, only speaking to say "Yes, your Honour" when St. Eve asked him if he understood each of his bail conditions.

There have been suggestions Estrada wants his client to curtail his habit of holding court with the media throughout the twists and turns of his legal drama. But in the two days since his release from prison, Black displayed some of his trademark swagger in brief remarks to the Canadian media hordes that had trailed him from Palm Beach to Chicago.

"It's a war and we're winning," he told waiting reporters Thursday night upon his arrival at a Chicago hotel in advance of his court appearance.

"It's about showing contrition and what Estrada has probably said to him is that if you run your mouth off, you may be back in front of that judge for reconsideration of your 78-month sentence on obstruction of justice," said Jacob Frenkel, a former U.S. federal prosecutor.

"After you've spent two years in jail, you should know where you don't want to return, and he does not want to return to jail. It is in his interests to keep quiet all the way throughout this process, no matter what happens."

The obstruction of justice conviction came after jurors watched security video of Black carrying boxes of documents out of his Toronto offices, loading them into his car and driving off. The documents were sought by government investigators.

He's challenging the IRS's claim, arguing that he was "neither a citizen nor a resident of the United States" and therefore not obliged to pay taxes in the U.S.

The IRS's case against him hearkens back to a far grander period in Black's life, alleging he failed to report and pay taxes on income stemming from personal use of Hollinger's corporate jets, the use of corporate money to buy former president Franklin D. Roosevelt's papers, and Hollinger International Inc.'s purchase 10 years ago of a US$5.9 million New York apartment for his use.

Hollinger once owned the Chicago Sun-Times, The Daily Telegraph of London, The Jerusalem Post and hundreds of community papers in the U.S. and Canada.

At the core of the charges against Black was his strategy, starting in 1998, of selling off the bulk of the small community papers published in smaller cities across the United States and Canada.

Black and other Hollinger executives received millions of dollars in payments from the companies that bought the community papers in return for promises that they would not return to compete with the new owners.

Prosecutors said the executives pocketed the money, which they said belonged to shareholders, without telling Hollinger's board of directors.

But Black's lawyers have maintained that federal prosecutors failed to muster adequate evidence that he defrauded anyone or tried to hide key documents. 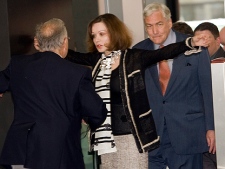 Conrad Black and his wife, Barbara Amiel, are checked at security as they arrive for his bail hearing at Federal Court Friday, July 23, 2010 in Chicago. (THE CANADIAN PRESS/Ryan Remiorz)