The relationship between the Toronto Police Services and the city's gay community has come a long way from the antagonistic days of the past, if the jovial scene at Cawthra Park on Friday was any indication.

Officers with Pride flags protruding from their uniforms rubbed elbows with local residents, businesspeople and even a skateboarder or two at the annual Toronto Police Services Board Pride Reception.

Meanwhile, officials on a makeshift stage spoke admiringly of the LGBT community's determination and a choir belted out cheeky songs including "Some of My Best Friends Are Straight."

The celebratory atmosphere at the event spoke to the ever-evolving relationship between the Toronto police and the gay community, one that appears to have moved light years beyond the bath-house raids of the early 1980s.

"There used to be a time when gatherings here with police weren't such a positive event," she said, adding the centre now assists in many police initiatives, including education of officers on same-sex partner abuse.

Those watching the scene on Friday would be hard-pressed to argue the success of the force's efforts to get closer to the gay community.

Measures to that end include the formation of the force's LGBT Community Consultative Committee, a group made up of volunteers and police service representatives used to advise police on public relations and queer issues.

"I believe we have achieved a reconciliation, a relationship based on mutual respect," Chief Bill Blair told about 150 people assembled at the park, home of the city's HIV/AIDS memorial.

The force also has an internal support network for homosexual officers, says Blair, who spoke of the police service's desire to continue improving relations.

"Within our police service, we want to welcome everyone, from all communities, to an organization that respects its members."

Andre Goh, the manager of the force's Diversity Management Unit, told the crowd he tries to "out himself" to each batch of new recruits that come into the force.

"And nearly every time, at least one man or woman will come up to me and say, 'I'm so glad you said that,'" he added. 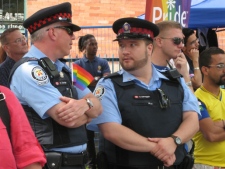