TORONTO - It's a championship with American roots that is expanding its horizons north of the border this week.

The Philip F. Anschutz trophy arrived at the Air Canada Centre on Wednesday as part of the buildup to Major League Soccer's championship game.

With a brass band playing in the background, two Mounties carried the sterling silver trophy to the arena doors before passing it off to MLS ambassadors Dwayne De Rosario and Geoff Aunger. They were joined by Toronto Mayor David Miller and league officials for the kickoff event to MLS Cup 2010 week.

The Colorado Rapids will take on FC Dallas in the MLS Cup on Sunday night at BMO Field (TSN2, 8:30 p.m. ET). It will be the first time the championship game will be played outside the United States in the league's 15-year history.

While two American teams will meet at the neutral site, there are some Canadian connections to the MLS Cup.

Aunger, a native of Red Deer, Alta., who grew up in Vancouver, became the first Canadian to win an MLS Cup with D.C. United in 1999. De Rosario, who is from Toronto and a star midfielder for Toronto FC, has won the trophy four times over his career.

Aunger picked up 44 caps for the Canadian team and finished his MLS career with the Rapids in 2001. He said the league has come a long way since he won the Cup over a decade ago.

"Maybe my family back home knew about (the victory) but that's probably about it," Aunger said with a smile.

He added that the MLS has developed a real presence in the Toronto area, and expects the Canadian market will continue to develop when franchises in Vancouver and Montreal enter the league.

De Rosario, who was named to the MLS Best XI after scoring a career-high 15 goals last season, said he doesn't have a favourite among his four championship wins.

"It's been memorable every time I won it. It keeps you hungry for more," De Rosario said. "Once you get that feeling, the enjoyment and excitement that comes with that, you want to keep having that taste of success."

There will be a first-time champion this year. Dallas has never made it to the final while Colorado lost to D.C. United in 1997.

The Philip F. Anschutz trophy was first introduced in 2008. The 60-centimetre-tall cup inherited some of the design elements from the two previous trophies going back to 1996.

The bottom of the trophy features a map of North America, with a star identifying the location of each MLS market. The cup has 11 facets on the front and back to symbolize the 22 players on the pitch.

Notes: The few dozen local fans in attendance were able to take pictures with the trophy. ...The brass octet from the University of Toronto's faculty of music played "The Cup of Life" when the trophy arrived. ... The MLS Cup will be televised on ESPN and Galavision in the United States. ... The game will also air in 166 other countries around the world. 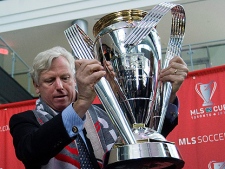 City of Toronto Mayor David Miller places the MLS Cup trophy on its stand to kick off MLS Cup 2010 festivities for Sunday's Major League Soccer championship game between FC Dallas and the Colorado Rapids in Toronto on Wednesday, November 17, 2010. (THE CANADIAN PRESS/Nathan Denette)