More than 400 homes and businesses -- about one-third of the town -- were reduced to ash and debris when a wind-whipped forest fire swept through in May and displaced many of its 7,000 residents.

The Insurance Bureau of Canada says the damage was more than $700 million and second only to the 1998 ice storms that hit Ontario and Quebec.

The benefit concert, appropriately entitled "Up from the Ashes," will be held Sept. 14 at the Francis Winspear Centre for Music in Edmonton. Joining Brandt will be the musical group High Valley.

"Roughly 40 per cent of Slave Lake was destroyed by fires, and residents are struggling to re-build their community and their lives. In using my music, I wanted to acknowledge their challenges, celebrate their courage, and raise funds for an important cause," said Brandt in a statement.

"Proceeds from the concert will benefit a yet-to-be-named project in Slave Lake that responds to both the current and future needs of this devastated community."

The event is being co-ordinated by Paul Brandt's Priceless Gift of Hope Foundation with support from Alberta Ford Dealers and UFA Co-operative Limited (UFA). 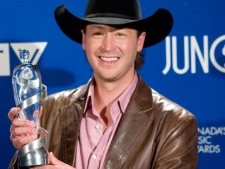 Paul Brandt holds his Juno award for Country Recording of the Year during the Juno Awards in Calgary Sunday, April 6, 2008. (THE CANADIAN PRESS/Larry Macdougal)