TORONTO - Figures from a mass of G20-related court appearances show the Crown withdrew charges against 58 people.

A group of 304 people -- the government had originally pegged it at 303 -- were scheduled to appear in a northwest Toronto courthouse Monday facing charges stemming from the summit.

A spokesman for the Ministry of the Attorney General says four people did not appear and bench warrants were issued for them.

The Crown stayed or withdrew charges against 31 people. An additional 22 had their charge withdrawn if they made a donation to charity and five were withdrawn through peace bonds.

In addition, six people pleaded guilty and nine others were listed in error, which the spokesman says is typically a result of duplication.

The remainder of the crush of people that descended on the courthouse Monday -- 227 of them -- have had their cases adjourned, mostly to September or October. 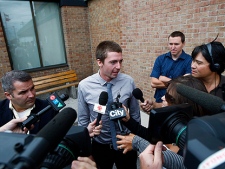 National Post staff photographer Brett Gundlock (centre) is interviewed by media outside court in Toronto, Monday, Aug.23, 2010 after charges against him and freelance photographer Colin O'Connor (back right) were dropped. G20-related charges are being dropped against some while others are being told to come back later as a crush of people make court appearances Monday.With 303 people scheduled to appear, police say it's one of the largest mass court appearances Toronto has ever seen. (THE CANADIAN PRESS/Nathan Denette)