Hundreds of cyclists converged on Queen's Park Saturday afternoon to draw attention to the dangers they face travelling on city streets and to call on the province to do more to protect them.

The Cycle and Sole rally was organized by a number of local bicycle advocacy groups and began at around 3 p.m.

"A lot of people see cycling as an extreme activity and that perception of danger and it's a reality of danger as well keeps people away," Albert Koehl, one of the organizers of the rally, told CP24. "The streets don't feel safe and in many cases they aren't safe."

Citing a statistic that suggests 60 per cent of Ontarians are afraid to take up cycling , Koehl said the province can do several things to make the streets safer for cyclists such as reducing speed limits and pressuring municipalities to install bike lanes on city roads.

He said making cycling safer is in everyone's best interest.

"Look we (cyclists) are doing our part by creating zero green house gas emissions, zero air pollution and no traffic congestion," he said. "All we are asking the province to do is to make sure that we have a little sliver of the road and to address issues like speeds of cars that are really quite frightening for a lot of people. Cycling is not just a thing that people are allowed to do, but cycling is a right and the right to be safe needs to be guaranteed by the province."

In the past city council and Mayor Rob Ford in particular have drawn the scorn of the bicycling community for not doing enough to protect their welfare.

"Toronto has a long ways to go. Other Canadian cities are investing millions of dollars in putting in hundreds of kilometres of bike lanes and Toronto is way behind the eight ball," rally participant Angela Bischoff told CP24 Saturday afternoon. "We need bike lanes everywhere and we need cars to slow down." 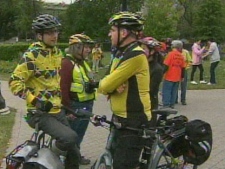 Participants in the Cycle and Sole rally are shown outside Queen's Park Saturday afternoon. (CP24)

Participants in the Cycle and Sole rally are shown outside Queen's Park Saturday afternoon. (CP24)