ST. PETERSBURG, Fla. - Danica Patrick's season got off to a tough start after she crashed out early in the season-opening Honda Grand Prix.

She was running ninth in the 22-car field on Sunday when rookie Raphael Matos tried to pass as the two went into one of the tightest turns on the 1.8-mile, 14-turn temporary street circuit.

As the uninjured drivers walked away, Patrick patted Matos on the helmet as if to say, "Use your head." The two then waited for a ride back to the pits, with a lively discussion taking place as Matos sat on a wall and Patrick stood in front of him.

Patrick, who has been known to blow up at other drivers in similar circumstances, was calm after she got back to the team's pit.

"It's not exactly the ideal spot to pass," she said. "We were going into the fast chicane there and there's no room, there's no room for two people. ... I was looking in my mirrors and I saw him. He just wasn't all the way up next to me."

Matos, making his IndyCar debut with the Luczo Dragon team, wasn't ready to take the blame.

"We just had a very unfortunate racing accident," the Brazilian said. "It shouldn't have happened. Danica made a big mistake passing a lapped car and I really had a good run on her. I was halfway up on her. I thought she'd give me enough room to pass, but she didn't." 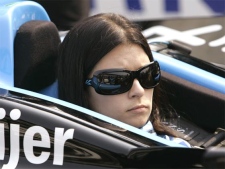 Danica Patrick sits in her car on the final day of practice for the Indianapolis 500 auto race at Indianapolis Motor Speedway in Indianapolis, May 25, 2007. (AP / Rob Carr)