TORONTO - Toronto Grocer David Chen will learn his fate Friday in a case that one legal expert says could give Canadian retailers more authority to make citizen's arrests of shoplifters.

Chen and two co-workers are on trial for assault and forcible confinement after chasing and tying up a thief who stole plants from his store in the city's Chinatown last May.

The accused have said they were simply making a citizen's arrest, and their lawyer says they should have never been charged.

The law states someone making a citizen's arrest must catch a perpetrator red-handed, but Chen caught the thief about an hour after he had shoplifted.

The judge will deliver his verdict in the case Friday.

"An acquittal, that does suggest that there may be more power in the hands of private citizens than the (Criminal) Code explicitly contemplates," he says.

"The only issue is whether or not the law should allow merchants to be able to arrest people who have committed crimes against their property earlier in the day or a week ago, because that's what it doesn't currently allow."

Anthony Bennett served 30 days in jail for the plant theft, and admitted at Chen's trial that he had returned to the Lucky Moose Food Mart to steal again. He says he is a "victim" because Chen tied him up and threw him into a van.

The case has captivated Toronto and drawn the ire of many who say Chen is the real victim.

Young says an acquittal would mean the judge is giving more authority to store owners to arrest someone, even when they don't catch someone in the act.

"An acquittal would speak loud and clear that this judge is maybe questioning the restrictions on the law," he said.

But if Chen is convicted, shopkeepers would have to wait for police, Young said, adding cases like Chen's are relatively rare because regular people who aren't merchants don't usually chase after criminals.

After Chen's case made headlines, Immigration Minister Jason Kenney said he was open to exploring whether any modifications to the law were necessary.

Liberal MP Joe Volpe has tabled a private member's bill that would create flexibility in the time frame that someone can make a citizen's arrest, and would put the onus on the citizen to show that here was a reasonable expectation of a crime.

He gave an example of someone stealing, and then returning to the scene of the crime an hour later.

"If somebody walks across the street, then comes back, 'right now' no longer exists. My amendment seeks to open that definition for 'in the act' by allowing for the citizen to effect an arrest in the example I just gave you."

Volpe said he wanted to generate debate and "prod the government into acting."

"A year and a half later, and nothing's happened, meanwhile somebody like David Chen gets victimized twice, first by the thief and then secondly by the legal process, which regrettably sees him as a potential criminal," he said.

The bill had first reading on June 16, and it is unclear when it will be read next.

NDP MP Olivia Chow later tabled her own private member's bill with different language from Volpe's, which if passed, would allow citizens to detain criminals within a "reasonable amount of time" after a crime is committed. 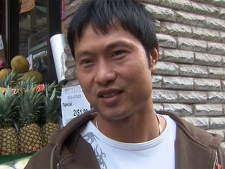