TORONTO - One of the caregivers accusing Ruby Dhalla of mistreatment has made similar allegations in the past against her original Canadian employer, the Liberal MP's lawyer said Thursday, adding it suggests a pattern.

During sobbing testimony this week before a parliamentary committee, the woman, Magdalene Gordo, and fellow caregiver Richelyn Tongson cast Dhalla as a hard-hearted taskmaster who forced them to turn over their passports and made them work long hours at menial chores.

Dhalla told the committee she had nothing to do with the women's employment and was rarely at the Mississauga, Ont., house when they worked.

A third woman has also made allegations she was mistreated when employed by Dhalla and her family.

At a joint news conference Thursday with Dhalla's lawyer, Howard Levitt, lawyer Shawn Philbert said he was contacted by a father of four who said he was Gordo's original employer.

The man, who wants to remain anonymous, said he sponsored her to come to Canada from the Philippines to be his children's caregiver, but she abruptly left after three weeks.

He called the Immigration Dept., because he did not want his name attached to her application any longer, Levitt said.

"Immigration told him that this happens all the time, that caregivers get sponsored and then leave after a short time," Levitt said.

"When he complained to the nanny agency... Ms. Gordo then apparently made the same allegations against him of overwork and harsh treatment that she's now making against Ruby Dhalla.

"It's clear there's a pattern."

Gordo and the other two women could not be immediately reached for comment.

Levitt has previously questioned the motives of the caregivers in coming forward with their allegations, suggesting political influence.

At the parliamentary committee in Ottawa, Dhalla insinuated the women may have been coached by Conservatives in exchange for guarantees of permanent residency.

Tongson sobbed uncontrollably as she described this week how she wanted to remain in Canada, where she could support her four children.

Levitt said under the Immigration and Refugee Protection Act a caregiver cannot miss 12 months of legal work in three years or they will be subject to deportation.

The only way they can avoid deportation is if they can make a claim on humanitarian and compassionate grounds, he said.

"(The act) requires these live-in caregivers to demonstrate there's unusual, undeserved or disproportionate hardship as defined by the immigration manual," Levitt said.

"I hope that my client's name is not being used for the purpose of circumventing the process and providing permanent residency."

Earlier Thursday, an advocate for immigrant caregivers told the parliamentary committee that she dealt with Dhalla directly in demanding the return of a caregiver's passport, which contradicts statements Dhalla has made.

Dhalla has denied withholding the passports of her mother's caregivers and insisted that her brother handled employment matters with the women.

But Agatha Mason, of the non-profit Toronto group Intercede, said she was contacted last year by Tongson, who claimed Dhalla refused to return her passport and birth certificate.

She said she phoned Neil Dhalla and he advised her to call his sister in Ottawa.

Mason said she then called Ruby Dhalla and the documents were handed over the next day. 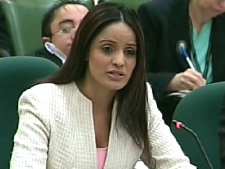 Brampton-Springdale MP Ruby Dhalla testifies before a parliamentary committee in Ottawa, Tuesday, May 12, 2009.