TORONTO - Federal Liberal Leader Stephane Dion has told a Toronto rally today he and NDP Leader Jack Layton want to help the country fight "the economic crisis that is coming."

Dion says Prime Minister Stephen Harper and his finance minister have done nothing for the economy and that's why they've lost the confidence of the Commons.

Dion told the cheering, flag-and-sign-waving crowd outside city hall one of Harper's own forecasters said the Conservative fiscal update would have prolonged the pain. About 1,000 people attended the event.

Dion says Harper took an economic crisis, added a parliamentary crisis, and tried to transform it into a national unity crisis -- all because he wanted to keep his job.

He accuses Harper of wasting time on partisan games and says now Harper "has locked the doors on Parliament" -- to which the crowd responded "shame, shame".

Layton says Harper's trying to cling to power but power flows from the people  -- and they won't let Harper lock the doors of democracy.

Dion says the Liberal-NDP coalition will work hard to protect and create jobs and stimulate the economy in all regions of our great country.

Harper prorogued Parliament this week until Jan. 26 to avoid a non-confidence vote that was expected to topple his government. 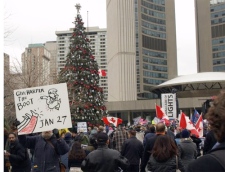 About 500 people attended the rally held outside City Hall at Nathan Phillips Square. 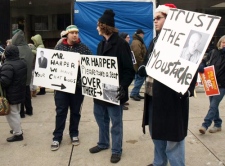 Demonstrators were armed with creative signage at the pro-coalition event.