Rob Ford was inaugurated as Toronto's new mayor on Tuesday, but the guest who introduced him at today's council meeting seems to have stolen the show.

In his introduction of the new mayor, CBC hockey commentator Don Cherry made explosive comments about the media and cyclists.

"I'm wearing pinko for all the pinkos out there that ride bicycles and everything," he said.

"I'm been being ripped to shreds by the left-wing pinko newspapers out there. It's unbelievable. One guy called me a jerk in a pink suit, so I thought I'd wear that for him too… These left-wing pinkos. They scrape the bottom of the barrel.

"(Rob Ford is) going to be the greatest mayor this city has ever seen, as far as I'm concerned," he added later in the speech. "Put that in your pipe, you left-wing kooks."

Afterward, Vaughan told CP24 he was disappointed to hear such divisive comments as the new council is getting ready to try to work together for the first time.

"For the record, I think Don Cherry's been in the shower with more naked left wingers than I ever have," he adding, making a joking reference to Cherry's past as a hockey player.

Before his speech, Cherry placed the official chain of office around Ford's neck in an unprecedented break from tradition. The task is normally done by the city clerk.

Ford congratulated Cherry for the speech, saying, "Oh, that was good," before going on to say the day was a celebratory one.

"Today we celebrate, but in the days to come, we'll have many heated debates," he said.

It was a busy day for the new mayor, who held his first one-on-one meeting with Premier Dalton McGuinty on Tuesday morning to pitch his plan to nix Transit City.

"We're going to work with the province to implement our plan, our subway plan," said Ford as he emerged from the meeting at Queen's Park.

When asked how easy it would be for Toronto's city council to stop Transit City, Ford said a vote was never needed to implement it, so one wouldn't be needed to scrap the project.

The province has already spent about $130 million on Transit City and about $1.3 billion worth of contracts have been signed. 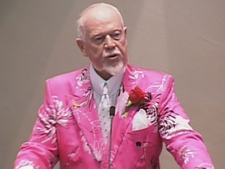 Hockey commentator Don Cherry speaks during a ceremony at city hall in Toronto on Tuesday, Dec. 7, 2010.