Dozens of police working to crack mystery of body in barrel 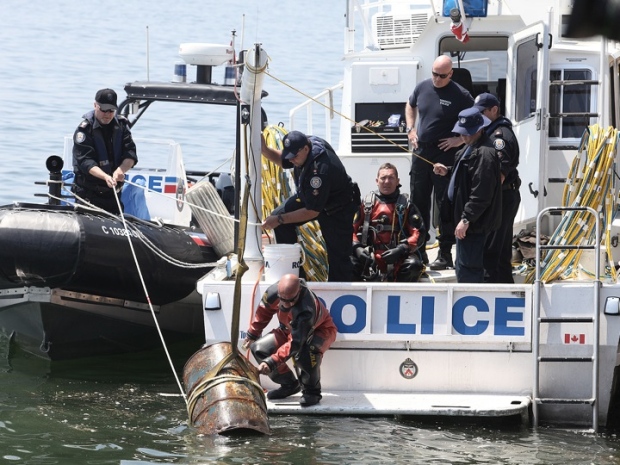 TORONTO -- Toronto police have been in touch with police forces in Ontario and Montreal as a coroner's team chipped away Monday at the concrete-encased body in a barrel that was hoisted from Lake Ontario.

Det. Justin Vander Heyden said in an interview Monday he has a "pretty good idea" of the identity of the victim in the 170-litre rusted steel drum, and when the crime occurred.

But he is awaiting confirmation from the coroner before notifying the victim's family members and releasing the name.

"We have been contacted by different services in our province and in Quebec making inquiries. I can't say much more than that," he said.

Montreal police confirmed they have been in contact with Toronto about the case. "We were in touch with them, but we're not commenting on it because it's their file," said Const. Daniel Lacoursiere.

"We had a missing person last week," Lacoursiere said. "It's one of the suppositions that I'm making. I don't know why they were in touch exactly."

Vander Heyden, the Toronto homicide detective, noted there are missing people in both provinces but wouldn't discuss specific cases, saying he didn't want to traumatize families that are waiting for "lost loved ones to come home."

"I don't want to glamorized this. Murder is murder," he said.

"I'm not going to comment on whether this may or may not be an organized crime-type investigation at this point. It's a murder, one person is dead and we're going to be investigating it like we investigate everything else."

Vander Heyden wouldn't reveal the gender of the victim, nor whether the body in the barrel is linked to the remains of one man that were found Saturday in two locations -- on a new residential street under construction in Oro-Medonte Township near Barrie, Ont., and in a ditch in Lake of Bays Township near Huntsville, Ont.

Ontario Provincial Police said that male victim has yet to be identified but that residents of both neighbourhoods where the remains were found should have no concerns about public safety.

"Obviously this weekend there's been a number of different sites where human remains have been found in Ontario," Vander Heyden said.

"So we've liaised with outside services to make sure we're all on the same page and to make sure we don't have crossover in our investigations, or if we do we deal with it accordingly."

He expected to have more to say Tuesday or Wednesday about the identity and the direction the investigation is taking.

Vander Heyden is confident the barrel was found where it was dumped in the lake, and had not been moved by currents because it was near the breakwall and was too heavy.

On Sunday, Toronto police divers used a crane to hoist the barrel out of the lake next to a locked, fenced-off construction site monitored by security guards. The area had previously been a parking lot.

More than one person must have been involved, Vander Heyden said, because the barrel was too heavy for one person to push it into the lake. He believes it was dumped into the water before the parking lot was turned into a construction site.

Dozens of officers are working around the clock on the case, he said, but they have not contacted any international authorities. They are looking into whether video surveillance from area businesses could aid in their investigation.

The coroner is making progress, he said, but it's a painstaking task.

"Trace evidence can be as small as a hair and we don't want that to be damaged in the process of removing it," he said.

"You can imagine the physical force required in removing concrete and chipping it apart. I can only imagine that's going to cause some sort of damage to the evidence. So it's a very delicate operation, that's why we leave it to the experts."