Electric worker dead after being hit by TTC bus, another in hospital

TORONTO - A 42-year-old electric worker is dead after being hit by a Toronto transit bus Thursday night.

Police say the bus was in the passing lane when it struck a truck in the curb lane which had its cherry picker arm positioned above the road.

A 51-year-old serviceman with Stacey Electric who was in the cherry picker bucket was thrown out despite being properly secured.

A second worker on the ground was hit by the bus.

Police say the man on the ground had "massive trauma" and died, and the worker who was thrown from the bucket has non-life threatening injuries.

Police are asking anyone with information to contact them.

Toronto has seen a string of transit-related crashes recently.

In the following two days, two vehicles were hit by streetcars in separate incidents. 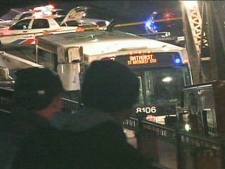