TORONTO - Imtiaz Miah knows that excessive caffeine consumption isn't good for his health, but the fourth-year electrical engineering student at Ryerson University turns to caffeinated drinks to help him stay alert to get his schoolwork done.

In his room, Miah displays all the empty containers for energy shots he's consumed over the last two years of school, a collection that numbers somewhere around 125. He said he's interested to see how many he will accumulate by graduation, at which point he hopes to kick the habit.

"I guess you could say I'm starting to rely on them," he said.

"But at the same time I have a heavy course load so it would be difficult without them. I really hope to stop taking them one day, though."

A recent study published in an American Psychology Association journal has confirmed what students like Miah already know to be true: that consuming energy drinks in small doses can improve alertness and decrease response times on a test measuring behavioural control.

But many experts are still concerned about the consumption of sugary energy drinks among adolescents and college students and are calling for more research, including Cecile Marczinski, co-author of the study Acute Effects of a Glucose Energy Drink on Behavioral Control, published in December's edition of the journal Experimental and Clinical Psychopharmacology.

Marczinski, an assistant psychology professor at Northern Kentucky University, gave energy drinks to 80 college students aged 18 to 40 and then tested their response times with a computer. She found that the drinks made response times faster, but this effect shrank as the dosage increased.

Half a can was the optimal amount for Marczinski's subjects, who were food-deprived for two hours and caffeine-deprived for eight. For someone with a belly full of food, the optimal dose may be closer to a full can, she said.

"There's a very large literature on what caffeine alone does, but there are very few studies that have examined energy drinks, and there's other things in energy drinks besides caffeine," said Marczinski.

In addition to a whopping dose of caffeine -- anywhere from 80 to 500 milligrams, versus the 100 milligrams in an average cup of joe -- energy drinks also contain stimulants like taurine and plenty of sugar. Unlike coffee, which is served hot and sipped on slowly, energy drinks can be downed as quickly as a soft drink, said Marczinski.

But unlike most of the doom-and-gloom reports, Marczinski said her research indicates that energy drinks can be helpful to students if consumed in small doses -- it's when they drink too many that they can become a hazard.

Her study also provides a new insight into the caffeine-and-alcohol blend, which has been banned from several American campuses due to concerns about the possibility of alcohol poisoning. Last month, the U.S. Food and Drug Administration warned four manufacturers of alcoholic energy drinks that the caffeine added to their beverages was an "unsafe food additive."

A recent study at Dalhousie University in Halifax confirms this trend. Researchers interviewed over 70 students about their energy drink and alcohol consumption and found that energy drinks doubled the amount that the students reported drinking.

To neurobiologist Jennifer Temple, it's not the energy drinks that are the problem, it's the marketing, which targets adolescent and young adult males. For example, ESPN reports that Red Bull spent roughly $240 million in 2010 on plastering its logo onto the cars of two Formula 1 racing teams, gaining more exposure during the races than any other brand.

Temple, an assistant professor of exercise and nutrition sciences at the University of Buffalo, co-authored a study which found that teenage boys are more sensitive to caffeine than girls are.

During the study, many boys anecdotally reported that while they used to drink just one can of Red Bull, they now have to drink several to get the same effects. It's this high dosage that concerns Temple, particularly due to the lack of research into what effects such high doses may have on teens.

"Drinking one energy drink isn't really bad, it's drinking six energy drinks that's bad," she said. "That has to come down to personal responsibility about not over-consuming."

Over-consuming can lead to numerous problems, ranging from lack of sleep to tooth decay and obesity due to the drinks' high sugar content, said Temple.

Muscle tremors, irritability, nervousness, anxiety, restlessness, insomnia, mood changes, gastrointestinal upset and an increase in heart rate and blood pressure are among other potential side effects of caffeine use, according to pharmacist Albert Chaiet of the Centre for Addiction and Mental Health in Toronto.

Chaiet, who specializes in substance use, adds that caffeine is a diuretic and can cause dehydration and electrolyte imbalance.

"If one is generally healthy, these things can be treated and managed," said Chaiet. "But it's not prudent to consume an excessive amount of something that's known to have cardiac effects. Certainly caffeine can have an effect on the heart, and if you have an underlying undiagnosed problem, it could be even more problematic."

Ahmed El-Sohemy, professor of nutritional sciences at the University of Toronto, said that approximately half of the population has an impaired ability to metabolize caffeine. This puts them at greater risk of symptoms such as nervousness, jitteriness, anxiety, headaches and cardiac problems. The problem, he says, is that it's often impossible to tell if you're vulnerable until it's too late.

El-Sohemy noted that while coffee has many potentially beneficial compounds like antioxidants, energy drinks are just sugar and caffeine.

But even with coffee it's important to be careful and observe the maximum daily intake recommended by Health Canada, said Chaiet. For adults, that's 400 mg per day (roughly three cups of coffee); for adolescents, no more than 2.5 mg per kilogram of body weight. 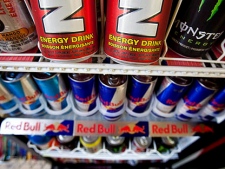 Energy drinks are shown in a store on Monday July 26, 2010 in Montreal. The Canadian Medical Association Journal is voicing alarm over the increasing popularity of highly caffeinated energy drinks among kids and teens. (THE CANADIAN PRESS/Paul Chiasson)