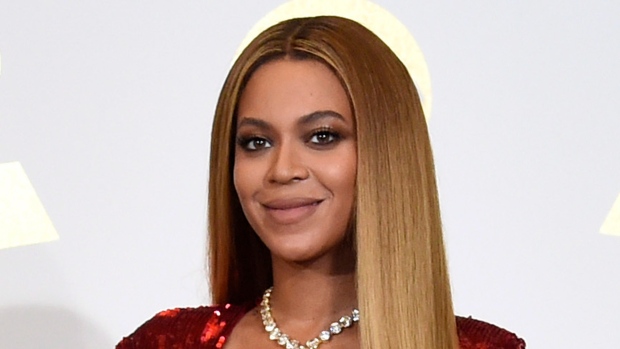 In this Feb. 12, 2017 file photo, Beyonce poses in the press room at the 59th annual Grammy Awards in Los Angeles.(Photo by Chris Pizzello/Invision/AP, File)

NEW YORK - Beyonce is bringing her Black parade to the Grammys: The pop star's anthem about Black pride scored multiple nominations Tuesday, making her the leading contender with nine.

Beyonce picked up song and record of the year bids with “Black Parade,” which she released on Juneteenth, the holiday that commemorates when the last enslaved African Americans learned they were free. The song, which reached the Top 40 on the pop charts, is also nominated for best R&B song and best R&B performance.

Beyonce's “Black Is King” film that highlighted Black art, music, history and fashion is up for best music film while “Brown Skin Girl,” a song dedicated to dark- and brown-skinned women, is nominated for best music video. The singer also earned three nominations for her slick guest appearance on Megan Thee Stallion's No. 1 hit “Savage,” including record of the year, best rap performance and best rap song.

A winner of 24 Grammys, Beyonce becomes the second-most nominated act in the history of the awards show with 79 nominations. She is tied with Paul McCartney, who earned a nomination this year for best boxed or special limited edition package.

Beyonce is only behind her husband Jay-Z and Quincy Jones, who have both earned 80 nominations each. Jay-Z picked up three nominations this year for his contributions to Beyonce's songs: He co-wrote “Black Parade” and “Savage,” thus earning nominations for song of the year, best R&B song and best rap song. Jay-Z has won 22 Grammys throughout his career.

Beyonce's domination this year came as a surprise since the singer did not release a new album. Other surprises, well snubs, include pop star the Weeknd being completely shut out and earning zero nominations despite having a No. 1 album, multiple hit singles and winning the coveted Super Bowl halftime performance slot. Luke Combs, who dominated the country charts and set records on streaming services this year, was also surprisingly shut out of nominations.

When Harvey Mason Jr., the Recording's interim president and CEO, was asked if he was surprised the Weeknd didn't earn a single nomination, he told The Associated Press: “You know, there's so many nominations and there's only so many slots, it's really tough to predict what the voters are going to vote for in any given year. I try not to be too surprised.”

The Weeknd tweeted later Tuesday an angry response to his snub: “The Grammys remain corrupt. You owe me, my fans and the industry transparency...” He did not elaborate further.

Instead, multiple nominations went to Taylor Swift, Dua Lipa and Roddy Ricch, who each earned six nominations and followed Beyonce as the second-most nominated acts.

Tracks competing with Beyonce's “Black Parade” and “Savage” for record of the year include DaBaby and Ricch's “Rockstar,” Malone's “Circles,” Lipa's “Don't Start Now,” Billie Eilish's “Everything I Wanted,” Black Pumas' “Colours” and Doja Cat's “Say So.” The latter track was produced by controversial music figure Dr. Luke, and he earns his first Grammy nominations since 2014, the year his former collaborator Kesha accused him of sexual assault. Dr. Luke, who used the moniker Tyson Trax on the credits for Doja Cat's song, has vigorously denied the allegations.

“Black Parade,” “Don't Start Now,” “Everything I Wanted” and “Circles” are also nominated for song of the year - a songwriter's award - along with Swift's “cardigan,” Ricch's “The Box,” JP Saxe and Julia Michaels' “If the World Was Ending” and H.E.R.'s “I Can't Breathe,” her protest anthem addressing police brutality.

“I think it's meaningful. I think it's reflective of what's gone on in our world,” Mason Jr. said of multiple protest songs earning nominations this year. “Musicians and artists and writers and producers, they write about what's going on in their lives. We tend to be fairly emotional people. When there's things happening, it's going to come out in our music and our art. It only makes sense that those types of songs would be nominated and celebrated by our voters. It really resonated with people. You listen to some of those songs and can't help but be moved.”

K-pop kings BTS earned their first-ever Grammy nomination after years of having success on the pop charts. They will compete for best pop duo/group performance with their No. 1 hit, “Dynamite.”

Other first-time nominees include the Strokes, Megan Thee Stallion, Michael Kiwanuka, Jay Electronica and Harry Styles, who became the first One Direction member to earn a Grammy nomination. He's up for best pop vocal album with his second solo release “Fine Line,” best pop solo performance for “Watermelon Sugar” and best music video for “Adore You.”

Kanye West, who has won 21 Grammys, only scored a single nomination this year - for contemporary Christian music album for “Jesus Is King.” Others who were snubbed include country performers the Chicks and Morgan Wallen, R&B singers Summer Walker, Teyana Taylor, Chris Brown and Brandy, and late rapper Juice WRLD.

Songs and albums released between Sept. 1, 2019 and Aug. 31, 2020 were eligible for nominations this year. Winners will be announced at the live show on Jan. 31.