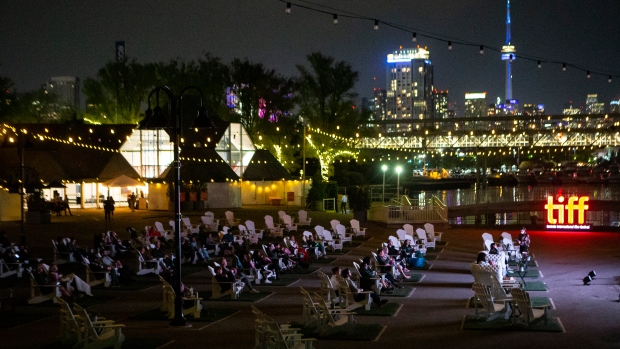 TORONTO - Jaime Rebanal felt something different in the air at this year's Toronto International Film Festival the moment he heard the “yarrrrr” at one his first screenings.

The enthusiastic pirate's cry is a reliable barometer of TIFF audience excitement that goes off when the anti-piracy warning appears before each film. But last week at this Midnight Madness screening of “Titane,” the hearty growl that once rippled through the auditorium sounded more like a whimper from the cheap seats.

“The `yarrrrrs' aren't as loud as they used to be,” Rebanal offers as a summation of TIFF screenings in the COVID-19 era.

“It's not nearly as energetic because we are still in this stage of recovery from everything that's been going on.”

Holding an in-person TIFF during the pandemic was never going to feel like business as usual, but moviegoers say it was impossible to imagine just how different this year's festival would be until the proceedings got underway.

Blame it on a combination of virtual screenings at home, strict COVID-19 guidelines and little promise of A-list talent showing up. All of those factors made the 2021 edition a decidedly muted event.

Gone were the glitzy crossroads between public accessibility and star power. This year, the festival offered sparse opportunities for either.

The proof was clearest outside the TIFF Bell Lightbox on King St. West, where most of the action takes place.

Along the sidewalks, a smatter of people could be seen making their way to their next film with a reserved ticket in hand and no sense of urgency. It was a stark contrast from past years when hundreds of moviegoers would snake around the block hours in advance with hopes of grabbing the best seats for the most anticipated movies.

The parade of black SUVs loaded with filmmakers and celebrities that would've once lined TIFF's neighbourhood went virtually unseen, replaced by locals walking their dogs and noisy construction that seemingly ran at all hours.

“It's just a regular Toronto street, even though we're going through one of the biggest festivals in the world,” noted Connor Webb, a moviegoer who attended numerous screenings.

Also cancelled this year was Festival Street, the pedestrian-only event that closes the area around the Lightbox in hopes of drawing families and making room for sponsored activations.

Even the famed TIFF sign that's rolled out each year as a social media photo opportunity went mostly unnoticed, tucked into a corner of the Lightbox entrance so people wouldn't congregate around it.

“It feels weird and it's very quiet,” said Carolyn Hinds, a Toronto-based freelance film critic who wandered the festival grounds for the week.

“You don't have the huge crowds, the music, the giant posters or anything like that.â€¦ Me and a couple friends were discussing it and we said, `It doesn't feel like TIFF.”'

Perhaps more than any other major film festival, organizers of TIFF faced an almost impossible challenge of replicating its magic as the so-called “people's festival” and a buzzworthy launchpad for awards season.

Travel restrictions imposed by the federal government introduced a level of uncertainty that left many visitors who might've flown into Toronto feeling as if it was better to sit this year out.

The few Hollywood film executives and publicists who did show up were greeted by a shadow of the TIFF scenery they once knew.

Several local haunts didn't survive the city's extended lockdown, including Italian eatery Kit Kat across from the TIFF Bell Lightbox and the Starbucks inside the Hyatt Regency, where many festivalgoers started their day and refuelled in the afternoons.

In their absence lingered a ghostly reminder of their presence: papered windows and the sun-stained outline of the now dismantled storefront signs.

Even the restaurants that were still open for TIFF operated as if a major festival wasn't happening in their vicinity.

Luma, a lounge inside the Lightbox where filmmakers once met to discuss their next project, saw only a few of its tables filled in the peak hours of TIFF's first Saturday night. The space closed on Sunday for the remainder of the festival.

Swanky nearby hotels that were once hotspots for celebrity watchers didn't attract their usual ilk, while the red carpet premieres that usually happened outdoors were taken indoors, silencing any possibility of screams and cheers from the public.

Inside movie theatres, masked festivalgoers couldn't snack on popcorn and drinks since all concessions were closed, while a 50-per cent capacity limit under Ontario guidelines meant everyone was distanced in reserved seats.

Movie fan Britany Murphy said those restrictions didn't seem to dampen the excitement at the screenings she attended. In some cases, she suggested it might've elevated the emotions.

“I was at `The Eyes of Tammy Faye' and the standing ovation was just as loud as it would be in a packed theatre,” Murphy said.

“I feel like people are making up for it by being louder.”

Stars themselves seemed to be swept up in the heightened energy too.

Jessica Chastain, who plays Faye in the potential Oscar contender, took the stage during a post-screening Q&A and was seen wiping away tears as she thanked the crowd.

Actor and director Kenneth Branagh broke down as he spoke about his semi-autobiographical film “Belfast” after its showing.

“Lockdown teaches you, whether you like it or not, about the things that were precious, that were simple, that had been taken awayâ€¦” he said, pausing to hunt for a tissue as he wept.

Losing some of the hubbub around TIFF couldn't detract from these human moments, and as for the overall cinematic experience, that survived, too, suggested Jonathan Forani, a one-time employee of the festival who now attends as a casual viewer.

“It felt like good, old TIFF again, in a lot of ways, even though some of the flourishes were missing,” Forani said.

“The festival was whittled down to its essential purpose, which is film itself.”