After time in the wilderness, Louis CK is welcomed in Israel 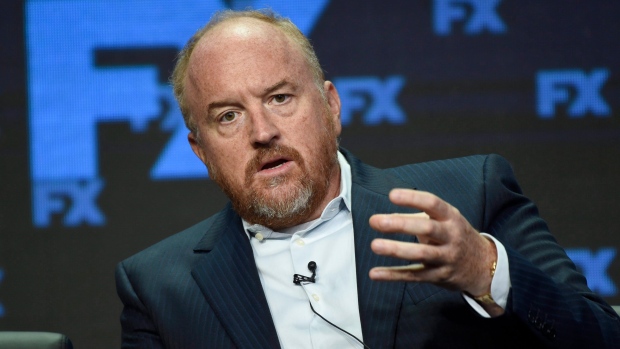 HOLON, Israel - Two years after being swept up in the #MeToo movement and acknowledging sexual misconduct with multiple women, comedian Louis C.K. took to the stage at a nearly packed basketball arena outside Tel Aviv, where the audience seemed ready to let it go.

“How have your last couple of years been?” he asked near the start of the hour-long set Thursday night, before describing himself sitting in a restaurant, eating alone, as someone at another table gives him the finger for the duration of the meal.

C.K. released a statement after the Times report, saying “these stories are true.” He acknowledged abusing his power over others and causing them pain but did not publicly apologize.

The revelations, which came at the height of the #MeToo movement against sexual abuse in the workplace, led to the cancellation of C.K.'s numerous TV contracts and the scrapping of his feature-length film, “I Love You, Daddy,” shortly before its release.

The comedian vowed to “step back and take a long time to listen.”

But he returned to the stage less than a year later, and is now on an international tour that includes several sold-out shows. Protesters have gathered outside some of them, including a small demonstration outside his first show in Tel Aviv organized by Kulan, a local women's advocacy group.

“They are basically telling him everything is OK, you're not going to pay a price for this and you will be given a stage,” she told the local Kan TV.

There were no protests Thursday outside the arena in Holon, a suburb of Tel Aviv.

Most of the more than a dozen audience members who spoke to The Associated Press had heard about the scandal. Some said they didn't know the details or that it wasn't clear whether he had done anything wrong. Several young men attending the show declined to comment. “Twitter is fragile,” one muttered as he strode away. “Feminists.”

The show drew an audience of around 5,000 men and women of all ages. Most appeared to be fans who felt the severity of the misconduct was not enough to justify a boycott.

“We don't support what he did to those women, but we like him as a comedian,” said Asaf, who came to the show with his wife, Tal. They declined to give their last name out of privacy concerns. “It's not like he raped someone,” he added.

She finally concluded that paying to see Louis C.K. was “like supporting animal rights and still eating meat.”

C.K. alluded to the scandal on a number of occasions throughout the performance. He said he used to love New York City, his home for many years, but that now he hates it, implying it's because of the negative attention he receives.

“I'd rather be in Auschwitz than New York City,” he told the almost entirely Israeli audience, which broke out in laughter and applause. “I mean now, not when it was open.”

The set was similar to his past material, with wry observations punctuated by raunchy and irreverent punchlines whose humour came largely from their shock value. There was an extended discussion of the history of using the term “retarded,” and passing references to the Boston Marathon bombing and the Sept. 11 attacks.

He did not repeat an earlier bit in which he made fun of school shooting survivors who had become gun control advocates, which had outraged many and raised concerns among some fans that he would reinvent himself as a right-wing comedian railing against political correctness.

Instead, he displayed some of the same sensitivity to sexual abuse that had earned him praise from many feminists before his rapid downfall.

After discussing his own misconduct, he observed that in sexual situations women sometimes act as though everything is OK when they are actually fearful or disgusted - and that men mistake this for consent. He compared it to listening to African-American slave spirituals and mistaking them for an expression of contentment.

It was perhaps the closest C.K. came to acknowledging that he had learned something deeper from his misconduct and its aftermath, and it was well-received, just like all the other jokes. Those who were prepared to forgive C.K. before the show emerged even more reassured.

“It was just hilarious,” Shiri Ayalon said as she left the arena.

“As a woman who's been very aware of everything that has happened over the #MeToo movement and all of that, I'd say that he's probably the only celebrity who's expressed regret over what he had done and was willing to actually address it,” she said.

“I think he should probably be un-boycotted.”