Alessia Cara, Will Arnett among those honoured at Canada's Walk of Fame 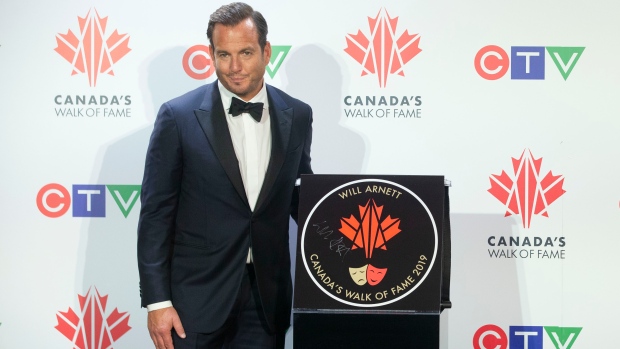 Actor Will Arnett is pictured with his star as he is inducted into Canada's Walk of Fame during an event in Toronto on Saturday, November 23, 2019. THE CANADIAN PRESS/Chris Young

TORONTO - Alessia Cara says getting recognition at this year's Canada's Walk of Fame gala event ranks among the most tremendous honours she's received in her career.

“I feel like getting acknowledged by your own country in this way is huge,” the 23-year-old performer said on the red carpet before she received the special 2019 Allan Slaight Music Impact honour on Saturday night.

“It's one of those things where I'm going to have to see it to actually believe it.”

The Grammy and Juno award-winning pop singer was among a group of Canadians being recognized for excellence in their respected fields, which include science, sports, entertainment and business. Each inductee was toasted at the gala dinner and will be given a star in Toronto's entertainment district.

“When I look at all the inductees, these are Canadians that have made such a difference in the world,” Klassen said.

“It's incredible to be a part of that, a very humbling experience.”

Fellow inductee Will Arnett, whose work on “Arrested Development” and “Bojack Horseman” has ushered him into the echelons of comedy fame, said he's honoured the organizers considered him worthy - but he has a few suggestions for future ceremonies to spice up the Canadiana.

First, he'd change their name to “The Sorrys,” and then he'd redesign the evening wear.

“Instead of just a regular tuxedo, if we wore Canadian tuxedos that would be better,” he said, pitching the combo of denim jeans and jackets.

As for the red carpet? He'd like to see a Zamboni crawling across it before the big show.

All joking aside, Triumph guitarist Rik Emmett said he was especially pleased when he realized the rock band's star would be near Roy Thomson Hall, a stretch of King Street West where generations of his family worked in the now-demolished Canadian Pacific Express building.

Presenters included 2002 inductee David Foster, who tipped his music producer hat to friend Treliving, owner of Boston Pizza and one of the stars of “Dragons' Den,” and Kurt Browning, who joined the Walk of Fame in 2001.

Browning said getting inducted was like “an introduction to a family” where he's wound up playing host and presenter to gatherings numerous times since.

“I seem to be the mascot of the Walk of Fame somehow,” he said.

“I think it's important that we feel connected and that we celebrate when someone from our Canadian family does well.”

Posthumous honours went to children's entertainer Ernie Coombs, known by many families as TV host Mr. Dressup. His children and grandchilden accepted on his behalf.

A tribute to James Naismith, who invented the game of basketball, included his grandson Jim and Isiah Thomas, an NBA All-Star and former Toronto Raptors executive.

Thomas, who was instrumental in establishing the Raptors in Canada, said he wanted to pay tribute to the man who created the sport he's invested much of his life in.

After the Raptors won the NBA championship this year, some wondered if basketball could eclipse hockey as the ultimate Canadian sport, but Thomas said he always saw room for both.

“Hockey will always be the godfather of Canadian sport,” he said. “However, we wanted to give the kids choices.”

A telecast of the 2019 Canada's Walk of Fame Awards airs Dec. 15 on CTV and will be available to stream through Crave on Dec. 20.

This report by The Canadian Press was first published Nov. 23, 2019.

Alessia Cara is pictured as she arrives at the Canadian Walk of Fame, where she is to receive the Music Impact award during an event in Toronto on Saturday, November 23, 2019. THE CANADIAN PRESS/Chris Young

Jim Naismith, the grandson of Dr.James Naismith, the inventor of basketball, pictured with his grandfather's star as he is inducted into Canada's Walk of Fame during an event in Toronto on Saturday, November 23, 2019. THE CANADIAN PRESS/Chris Young