Hours after Alice Munro became the first Canadian-based author to win the Nobel Prize in literature, the accomplished short story writer was still trying to wrap her head around her newfound place in literary lore.

Munro seemed to be at a loss for words and a little overwhelmed by all of the attention after she became the 110th Nobel laureate in literature and only the 13th woman to receive the prestigious $1.2 million prize. She is the first Canadian woman to win the award.

“I’m feeling wonderful. It’s truly great,” Munro told CP24 by telephone as she celebrated with her daughters at her home in Victoria, B.C., on Thursday morning.

Described as a contemporary Chekhov, Munro is one of Canada’s best-known writers and she is regarded as one of the world’s greatest short story writers. When her name was announced at a news conference in Stockholm, the Swedish Academy, which selects the winners, called her a “master of the contemporary story.”

The honour didn’t come as a complete surprise to Munro, despite a 4 a.m. wakeup call informing her that she had won.

Munro, who hails from the farming town of Wingham, Ont., knew she was being considered for the prize (odds makers had her as high as number two on their list of favourites) but she never imagined she would win.

“I didn’t think about (my chances) at all,” said Munro, who will receive the award at an event in December. “I would have said if you asked me that (before), my chances are pretty slight.”

A few hours after that 4 a.m. phone call, the achievement was still sinking in. Munro was so overwhelmed that she was unable to explain who delivered the news.

“I think my daughters told me. I don’t even remember. It’s been so wild,” she said amid dozens of congratulatory calls from well-wishers and interview requests from reporters.

Munro won the prize a few months after telling the National Post she was “probably not going to write anymore.”

She won her third Trillium Book Award for her latest short story collection, “Dear Life,” which was published in 2012.

Out of all the awards, the Nobel Prize in literature is different from the others because of its global importance and recognition, Munro told CP24.

Twitter exploded with excitement and congratulatory messages after Munro’s name was called, but Munro herself was oblivious to the reception because she isn’t plugged into social media.

She reacted with surprise when she was told Prime Minister Stephen Harper wrote a congratulatory tweet.

“Really? I’m in British Columbia, you know, and things haven’t got through here yet that I know of,” Munro said. “My daughters are with me and they’re rather delighted, so that’s the only recognition I’ve been getting so far.”

Munro is beloved by readers around the world for her striking portraits of women living in small-town Ontario.

Despite all of her past successes, Munro said she doesn’t spend time reflecting on her career.

“I just go on and I’m always in the present pretty much, and that’s why I don’t think that anything I might have done before matters as much as what I do now, even though I’m quite elderly and it is unusual for me to go on, but it’s true that I don’t think in that way,” Munro explained.

Munro’s win is shining a spotlight on Canadian literature.

In an interview with The Canadian Press, McClelland and Stewart Publisher Ellen Seligman called it a “momentous day for Canada and Canadian writing, and a thrilling honour in recognition of the extraordinary and enduring talent of Alice Munro, one of the great writers of our time.”

In a written statement, Harper said Munro’s “remarkable accomplishment” is “the culmination of a lifetime of brilliant writing.

“Ms. Munro is a giant in Canadian literature and this Nobel Prize further solidifies Canada’s place among the ranks of countries with the best writers in the world,” Harper said. “I am certain that Ms. Munro’s tremendous body of work and this premier accomplishment will serve to inspire Canadian writers of all ranks to pursue literary excellence and their passion for the written word.” 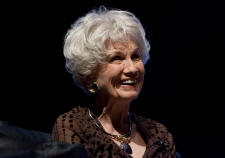 Writer Alice Munro attends the opening night of the International Festival of Authors in Toronto on Wednesday, Oct. 21, 2009. (The Canadian Press/Chris Young)