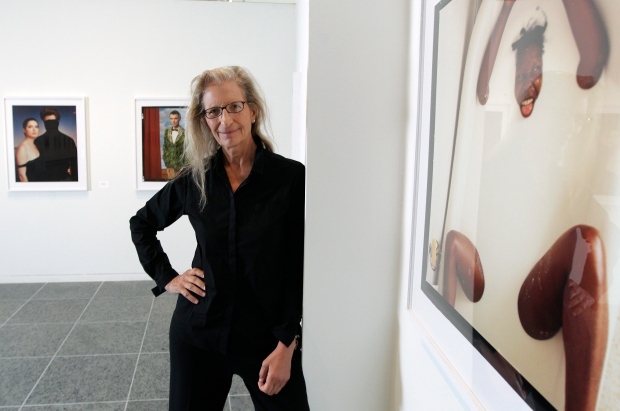 Annie Leibovitz stands near some of her work before the opening of her exhibition at the Wexner Center for the Arts Friday, Sept. 21, 2012, in Columbus, Ohio. (AP / Jay LaPrete)

HALIFAX -- It's all up to Annie Leibovitz now.

Unless the famed American photographer personally signs off on an exhibit to display her iconic portraits, they will remain in storage at the Art Gallery of Nova Scotia.

"The gallery can not show the work without her permission," Halifax gallery spokesman Colin Stinson said in an email Thursday, noting that although the gallery owns all the pieces, Leibovitz maintains the copyright.

"Our first step in the process will be to work with the artist to determine the best path forward," he said.

The gallery was dealt a crushing blow this week when a federal board refused to grant the collection a certification of cultural significance, which comes with important tax incentives for donors.

It was the gallery's fourth and final application to the Canadian Cultural Property Export Review Board, which once again ruled that the bulk of the photographs did not meet the criteria for outstanding significance or national importance.

The collection includes a portrait of a naked and pregnant Demi Moore, a brooding image of the Queen, Whoopi Goldberg bathing in milk, Dan Aykroyd and John Belushi as the Blues Brothers, and the haunting photo of a naked John Lennon and Yoko Ono hours before the musician was gunned down in front of his New York apartment.

While the board certified Leibovitz's file collection -- a series of snapshots that led to final photographs -- it refused to certify the large-scale exhibition-style prints.

A spokeswoman for the Canadian Heritage Department, which oversees the federal board, said the board receives over 500 certification applications a year from museums, libraries, archives, and other institutions.

Justine Lafond said in an email that over 80 per cent of certification applications are approved, often at the proposed fair market value.

"A smaller number are refused for not meeting the criteria of outstanding significance and national importance," she said.

However, Lafond said she could not comment or publicly acknowledge any certification application due to an obligation to protect the confidentiality of taxpayer information.

Toronto art lawyer Aaron Milrad said the board's repeated refusal to certify the Leibovitz works could send a chill over the art world.

"It should be a concern for museums and art galleries in Canada," he said in an interview Thursday. "On my part, I will donate less than I would otherwise."

Milrad said the works were purchased for roughly US$4.75 million but have a fair market value closer to $20 million, which would have resulted in a tax break.

The contract between the artist and the donor stipulated that a final payment was due upon certification, he said.

But Milrad said the donor did everything by the rules, and called the board's refusal to certify the works "petty."

"I'm frustrated to see this kind of an attitude as a precedent," Milrad said. "They obeyed the rules and they got independent appraisals from highly-regarded appraisers knowledgeable about the American photography market."

The family of Al and Faye Mintz of Toronto donated the images to the gallery in June 2013 in what was the largest single donation of one artist to the gallery.

Harley Mintz said recently in an emailed statement that the family is disappointed that this "spectacular exhibition is tucked away and not available to the public."

Meanwhile, Milrad said despite the controversy surrounding the collection there is a fairly good chance the works will be displayed eventually.

"It makes no sense for an artist to have something in a gallery and not allow it to be shown," he said. "And there are certain exceptions under the copyright act for fair use and the right for the public to see things. I don't buy into the fact that they need permission to show this art."

Besides copyright issues, Milrad said Leibovitz could refuse to have her photography displayed under so-called moral rights.

"The moral rights would prevent the works from being used with an association with a product or a service that could be prejudicial to her honour or her reputation," he said. "So if you're having a sponsor and she thinks it would be bad for her to have her art under that sponsor, she can say no."