Anthony Hopkins knows one thing: 'None of us know a damn thing.' 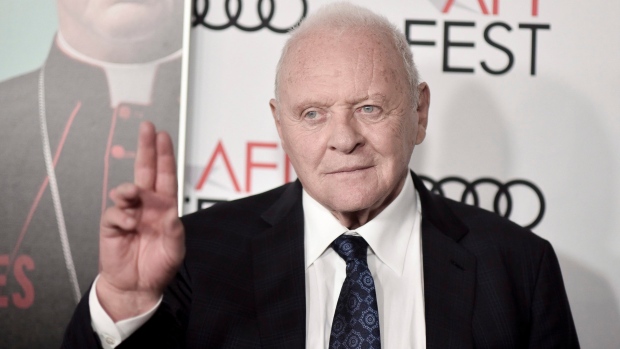 Anthony Hopkins attends 2019 AFI Fest - "The Two Popes," at the TCL Chinese Theatre, Monday, Nov. 18, 2019, in Los Angeles. Hopkins is faring pretty well, all things considered. From the comfort of his L.A. home, Hopkins says life under lockdown is healthier than ever. THE CANADIAN PRESS/AP/Photo by Richard Shotwell/Invision/AP

From the comfort of his Los Angeles home, Hopkins says life under lockdown is healthier than ever.

He's eating well, resting properly. He reads his books, calls his friends. And while he regrets that he won't be able to attend the Toronto International Film Festival premiere of “The Father” on Monday, the screen veteran can't say he misses the red-carpet fanfare.

At age 82, the Welsh-born actor has found peace in a new philosophy of existential humility: The only thing we know for sure is that our time on Earth is terminal, he says. Everything else is baseless “egotistical certainty.”

“None of us know a damn thing. It's a great leveller,” Hopkins told The Canadian Press in a recent phone interview. “I have to apply that to myself, to my own ego.”

“I mean, I've been a successful actor,” continues Hopkins, whose accolades include an Oscar, three BAFTAs, two Emmys, the Golden Globes' Cecil B. DeMille Award, a knighthood from the Queen, and most recently, a TIFF Tribute Award for which he'll be honoured on Tuesday.

“You just have to watch all the old movies ... They're all gone. They're just memories. They were just dreams and flickering in a darkened cinema.”

The inevitability of obsolescence looms over “The Father,” a stage-to-screen adaptation starring Hopkins as Anthony, a man suffering from memory loss as his daughter, played by Olivia Coleman, struggles to find a way to look after him.

The film dramatizes Anthony's cognitive disorientation by upending the viewer's sense of space and time. Scenes loop back and fold in on themselves, settings bleed into one another and faces shift as the protagonist loses his sense of self to the horror and helplessness of those who love him.

Hopkins' performance grounds this mind-altering cinematic experience, but trite as it sounds, he said it was an “easy” role to play.

“I'm of that age now,” Hopkins said. “People I've known have died, and (people) who are younger than me have died. But I just take it all as a part of life. I don't agonize over it.”

He said the emotional toll of the story fell to Coleman, who like many relatives of people with dementia, was cast in the draining role of caregiver.

“The sufferer from dementia is at least - well, in his own hell - but is in a way out of it. He's cushioned against that pain,” said Hopkins.

“I felt more sorry for the (families) ... who have to cope and then put their parents in homes, and the grief that must cause them.”

As COVID-19 has ravaged long-term care homes, Hopkins hopes society will heed to this “wake-up call” and find a new model to look after aging populations.

But to ensure a better future, he said the world's leaders have to stop flailing and finger-pointing and overcome their belief that they have all the answers.

“I think most of the harm is done by intellectual nonsense and people who just want to show how clever they are,” he said. “It's a tough way of having one's human ego shattered by an invisible microbe which will just wipe you out.”

But really, what does Hopkins know?

“The Father” makes its TIFF premiere at the RBC Lakeside Drive-In on Monday.