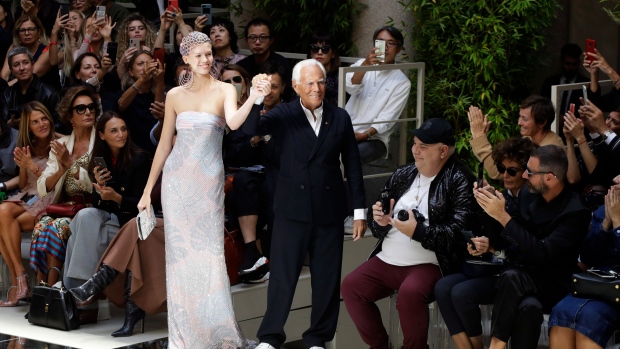 Designer Giorgio Armani, center right, poses with a model as he accepts applause at the conclusion of the Armani Spring-Summer 2020 collection, unveiled during the fashion week, in Milan, Italy, Saturday, Sept. 21, 2019. (AP Photo/Luca Bruno)

Milan designers are presenting fashion as essential. It no longer refers to must-haves, but to a distillation of ideas, discarding excess in collections and by example in wardrobes, to discourage waste.

Giorgio Armani's collection presented on Saturday, the fourth day of Milan Fashion Week, was both earthy and ethereal, with myriad natural references the designer said were meant to create closeness with Mother Earth.

The Italian brand Twinset put a sign in its window during fashion week: “Don't Buy. Please Don't Buy.” The message reflects the fashion world's recognition that rampant consumerism is bad for the planet, a reality that fashion houses still must balance with' economic realities.

To drive home that message, Livia Firth's Eco-Age consultancy launched the #30Wears campaign to help focus sustainability-minded consumers on buying only apparel that gets repeated use - 30 wears as a minimum.

Highlights from womenswear previews for Spring/Summer 2020:

Giorgio Armani said he wanted to make an environmental statement with a collection titled “Earth,” exploring connections with nature.

The 85-year-old designer did so through colour, mixing earthy coffee brown with royal blue, black with shell pink and ice green. Sheer floating volumes and intricate artisanal hand-beading maintained the connection with humanity.

The collection expresses “a desire for nature” and the need to safeguard the planet, Armani said before the show.

The collection had more of a couture feeling than ready-to-wear -something that perhaps Armani was signalling when he took his bow wearing a suit rather than his standard Milan runway sweater or T-shirt.

“Our job is to propose solutions, look at the past to review it, correct it if necessary, and emphasize it, as I have done,” he said.

Salvatore Ferragamo's looks for next spring and summer have an essential, even monastic, quality, with soothing colours and clean silhouettes. Designer Paul Andrew might even call it an antidote to sports and streetwear that has swarmed runways in recent seasons.

The Ferragamo 2020 co-ed collection “is more about elevated workwear,” Andrew said backstage. “There is clearly a demand, a feeling, that people want to be comfortable and at ease, but I never want to engage with, like, hoodies with Ferragamo written on it."

The looks had a casual feel, including knitwear tucked into short tennis skirts with a concealed athletic pocket, anoraks reinterpreted as flowing dresses, high-waisted trousers cinched with a belt, knit and crocheted dresses that revealed just a little skin. Andrew said he was trying to recreate the memory of a 1980s southern Italy holiday, captured in a photo of him and his brother wearing floral Bermuda's on his mother's dresser.

“After three years working with Ferragamo, this is the first time I need to engage and embrace this house icon and make it feel modern and relevant,” he said.

“You do luxury. Not everyone can say that,” Nef, a former model, told Andrew backstage.

To mark the 10th anniversary of his MSGM, Massimo Giorgetti is putting aside his streetwear roots and focusing more on the free-spirited Italian tailoring side of the brand.

“I am moving a bit away from streetwear without negating it,” Giorgetti said backstage. “Without streetwear, I wouldn't have arrived here.”

The collection, a sort of 10-year retrospective, took ideas from previous collections and gave them a new twist “without nostalgia or a sense of deja vu,” he said. That meant a focus on colour, prints, volumes with big bows, crystals and. But no branded sweatshirts, ironic T-shirts or sporty attire.