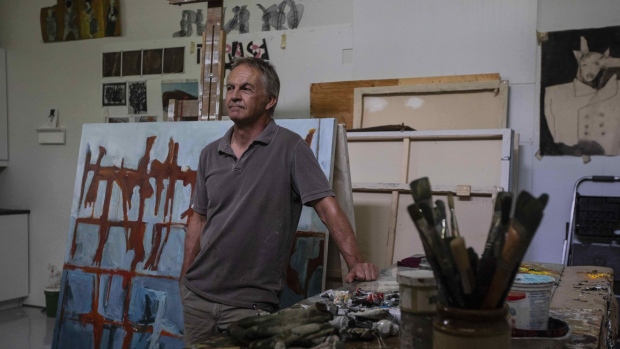 Artist Paddy Lamb pictured in his studio in Edmonton, on Friday July 29, 2022. There is a proposed law change introducing a resale fee for an artist's work. THE CANADIAN PRESS/Jason Franson

Artists are to get paid when their work is resold in a shakeup of copyright laws that would give them a slice of collectors' profits.

Painters, sculptors and other visual artists stand to get a payout when their work is resold at auction and by galleries, in a government move designed to help sustain thousands of artists currently working below the poverty line.

Under reforms of copyright law, being drafted by Innovation Minister François-Philippe Champagne and Heritage Minister Pablo Rodriguez, artists would get a "resale right" giving them a royalty during the term of copyright, according to Champagne's office.

Artists complain that they now get nothing if paintings and sculptures increase in value dramatically.

Montreal abstract artist Claude Tousignant, whose painting Accélérateur Chromatique 90 resold in 2012 for $110,000, is among the artists supporting reform of the law. He would have received $5,500 had changes to copyright law being prepared by Ministers, been in place when it was resold.

"Our government is currently advancing work on potential amendments to the Copyright Act to further protect artists, creators, and copyright holders,” said Laurie Bouchard, a spokeswoman for Champagne. “Resale rights for artists are indeed an important step toward improving economic conditions for artists in Canada."

CARFAC, which represents Canadian artists, wants artists to get five per cent of the value of their work when it is resold, and for their estate to receive funds according to copyright rules decades after their death.

It says at least 90 countries, including the United Kingdom and France, already have resale rights for artists, but Canada is lagging behind, driving many artists to abandon their craft because they cannot make a living from it.

"It's important to really acknowledge that half of our artists live in poverty," said April Britski, executive director of CARFAC. "We all benefit from arts and culture, and our creators deserve a better, more stable income."

The forthcoming change in the law follows years of campaigning by Sen. Patricia Bovey, the first art historian in the Senate.

Bovey, former director of the Winnipeg Art Gallery, said France has had resale rights for over 100 years and the change to copyright laws is far overdue in Canada.

The senator said she knew of many artists who had sold works at the beginning of their careers for small sums, and seen them appreciate "by 10 times or more."

Inuit artists, who often live in remote areas and sell locally, are among those who would particularly benefit if they get a slice of resale value at galleries and auctions.

"Artists are the group in Canada who make up the largest percentage of the working poor — below the poverty line," Bovey said. "It's our artists who tell us who we are, where we are, what we as a society face. If they can't financially support themselves we will lose that really important window on who we are as Canadians."

Paddy Lamb, an artist based in Edmonton, said it's very hard to make a living in the arts even for established artists.

He said he had seen works leap in value when artists become established and their art is sold at major galleries or auction rooms.

"For Inuit artists, as soon as their work leaves Nunavut it immediately appreciates in value … and (the artists) receive none of that," he said. "This is a tool to enable artists to make a living."

He said Canadian artists know from artists from countries where resale rights are already in place, how important the payouts are to "help people out."

"Most payouts in Britain come in smaller increments to artists who are not A-list artists," Lamb said. "In Australia, a lot of that goes to Aboriginal artists. What we are asking for is a real good level playing field."

CARFAC's vice-president, Theresie Tungilik, an artist who lives in Rankin Inlet, said it is "unfair" that artists who see work resold are not "getting a penny from it."

"I've been watching how the world has been treating its artists," she said. "France has done this over a hundred years ago and it is important for all Canadian artists, including Inuit artists, that they have the same right."

This report by The Canadian Press was first published Aug. 6, 2022.