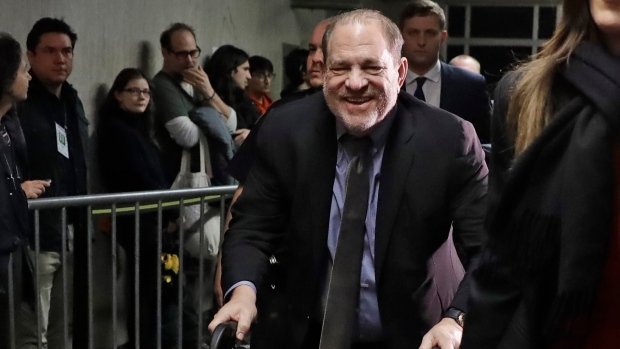 NEW YORK - With Harvey Weinstein's fate hinging largely on what his accusers remember about alleged sexual assaults years ago, his lawyers Friday turned to an expert known for studying false, repressed and unreliable memories.

As memories fade, Loftus said, people become more vulnerable to “post-event information,” including media reports that can distort what they remember. They also can distort their own memories with inferences and guesses about past events.

False memories “can be experienced with a great deal of detail, a great deal of emotion, even though they're false,” she said. “The emotion is not a guarantee you're dealing with an authentic memory.”

Loftus took the witness stand a day after prosecutors rested their case against Weinstein. It featured more than two weeks of testimony, including the accounts of six women who say the once powerful Hollywood boss subjected them to vile sexual behaviour.

Weinstein's lawyers are aiming to cement doubts about the women's allegations after using cross-examination to highlight inconsistencies in some of their accounts. In some cases, the encounters the women were recalling happened a decade or longer ago.

Referring to actress Annabella Sciorra, who alleges Weinstein barged into her apartment and raped her in 1993 or 1994, Loftus said, “that's an extraordinarily long period of time where there can be substantial fading of memory.”

If he does, he faces the prospect of prosecutors grilling him over the allegations and could give them a opening to bring in more witnesses in an attempt to rebut anything he says.

“That is a question that does not have an answer at this point,” attorney Arthur Aidala said. “We want to see how our defence case goes.”

Weinstein is charged with raping a woman in a Manhattan hotel room in March 2013 and forcibly performing oral sex on a different woman in 2006.

Weinstein, 67, has maintained any sexual encounters were consensual.

Loftus was on the stand for for about an hour, her testimony curtailed by a ruling barring her from talking about memories specific to sexual interactions. She testified that she also was not asked to evaluate any of the accusers or their testimony.

Loftus, the co-author of the 1994 book “The Myth of Repressed Memory: False Memories and Allegation of Sexual Abuse,” has stirred controversy in her field, partly because her work on behalf of big-name clients like serial killer Ted Bundy, but also because her testimony often helps undermine people who say they are victims.

In her earlier book “Witness for the Defence,” Loftus wrote that in her work for Bundy she seized on “leading and suggestive questions” by investigators and “hesitations and uncertainties on the part of the victim” as signs of muddled memories.

On the stand Friday, she sounded a similar note, telling jurors that interactions with law enforcement “can lead people to want to produce details,” she said.

“Some can be accurate, and some can be false and inaccurate,” Loftus said.

When prosecutor Joan Illuzzi-Orbon asked the witness whether she was originally asked to be a defence consultant, rather than a witness, she responded, “I don't remember what I was asked exactly.”

“Is that due to post-event information?” Illuzzi quipped.

Weinstein's lawyers skipped plans to start Friday off by calling Hollywood writer and director Warren Leight to the stand to testify about Sciorra's prescription drug use during a movie shoot in the early 1990s.

Sciorra, now 59, testified that she was hooked on Valium when the film, “The Night We Never Met,” started shooting in late 1992, but refuted defence suggestions that she was still using it when she alleges Weinstein raped her. She said she'd weaned herself off by then.

The Associated Press does not typically identify people who say they have been victims of sexual assault, unless they come forward publicly.