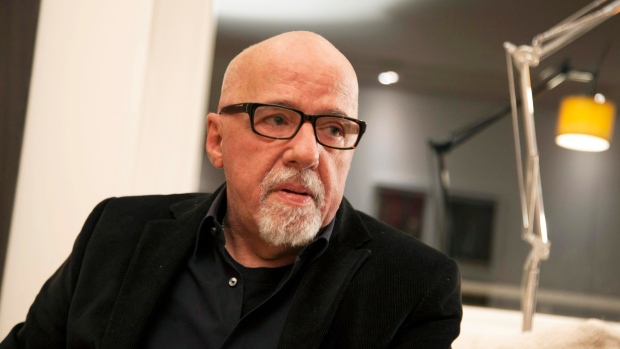 FILE - In this Dec. 19, 2014 file photo, Brazilian author Paulo Coelho appears during an interview at his apartment, in Geneva, Switzerland. Kobe Bryant and Coelho were working together on a children's book since August of last year, but the author decided to delete the draft hours after he learned the 18-time All-Star who won five NBA championships had died at age 41 in a helicopter crash Sunday, Jan. 26, 2020. (AP Photo/Boris Heger, File)

SAO PAULO - Kobe Bryant and Brazilian writer Paulo Coelho were working together on a children's book, but the author of "The Alchemist" said he deleted the draft after Bryant's death in a helicopter crash.

The 72-year-old novelist tells The Associated Press that the two men started discussing the project in 2016, when Bryant retired after a 20-year NBA career.

They began writing a few months ago.

Within hours of hearing of Bryant's death Sunday, Coelho announced that he would delete the draft, rather than finish the book without the 41-year-old five-time N-B-A champion.

Coelho says it didn't make any sense to publish without Bryant.

Coelho's decision disappointed many of Bryant's fans, who flooded the writer's social media channels asking for the draft not to be erased.

Bryant was a fan of Coelho's and called "The Alchemist" his favourite book.

Coelho, who has sold tens of millions of books, said the idea behind his collaboration with Bryant was to inspire underprivileged children to overcome adversity through sports.