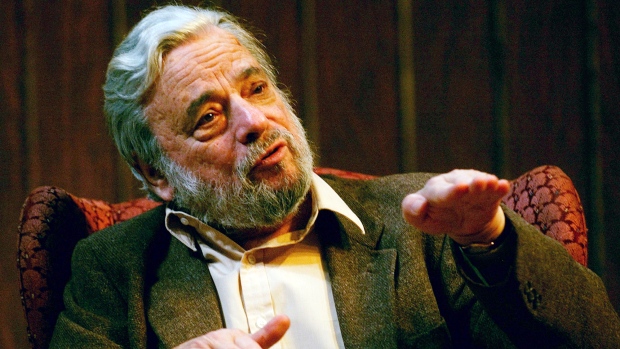 FILE - Composer and lyricist Stephen Sondheim gestures during a gathering at Tufts University in Medford, Mass., on April 12, 2004. Sondheim, the songwriter who reshaped the American musical theater in the second half of the 20th century, has died at age 91. Sondheim's death was announced by his Texas-based attorney, Rick Pappas, who told The New York Times the composer died Friday, Nov. 26, 2021, at his home in Roxbury, Conn. (AP Photo/Charles Krupa, File)

Tributes quickly flooded social media following the death of Stephen Sondheim as performers and writers alike saluted a giant of the theater:

“Rest In Peace, Stephen Sondheim, and thank you for your vast contributions to musical theater. We shall be singing your songs forever. Oh, my heart hurtsâ€¦” - singer and actor Lea Salonga, via Twitter.

“There are no words I can find for this loss. He would know what to say. Rest well, dearest Steve.” - singer and actor Laura Benanti, via Instagram.

“Thank the Lord that Sondheim lived to be 91 years old so he had the time to write such wonderful music and GREAT lyrics! May he Rest In Peace.” - singer, actor and director Barbra Streisand, via Twitter.

“Thank you for everything Mr Sondheim. Speechless. We are so lucky to have what you've given the world.” - singer and actor Aaron Tveit, via Twitter.

“He influenced all of us, whether we knew it or not. Rest In Peace. You were a gift to this world.” - actor and singer Kristin Chenoweth, via Twitter.

“Devastating news. Hard to fathom that he was in fact mortal like the rest of us. But bow lucky are we to have lived in the world at the same time as this great man. No one can replace him.” - singer and actor Judy Kuhn, via Twitter.

“I am so so sad to lose my friend Steve Sondheim. He gave me so much to sing about. I loved him dearly and will miss him so much. Thank you for all the gifts you gave the world, Steve.” - singer and actor Bernadette Peters, via Twitter.

“Every so often someone comes along that fundamentally shifts an entire art form. Stephen Sondheim was one of those. As millions mourn his passing I also want to express my gratitude for all he has given to me and so many more. Sending my love to his nearest and dearest.” - singer and actor Hugh Jackman, via Twitter.

“For those of us who love new musical theater: we live in a world that Sondheim built. My spirit is low, and I swear the city is quieter than usual tonight with the knowledge that he's gone. Feeling thankful for all he created and for the awe he will continue to inspire.” - Music supervisor, arranger and orchestrator Alex Lacamoire, via Twitter.

"Sondheim, thank you. I have no words so I'll use one of your lyrics that has held me down for years. “Someone is on your side. No one is alone.” - singer and actor Joshua Henry, via Twitter.

“Broadway has lost a musical genius.” - Actor and author Marlee Matlin, via Twitter.

“There are giants in the sky. RIP Stephen Sondheim. Lucky us, that we inhabited the earth while you were alive and creating. My heart is heavy.” - producer Tom Kirdahy, via Instagram.

“My heart is saddened for the loss. But my memories live on foreverâ€¦” - actor and singer Chita Rivera, in a statement.

“The magnitude of Stephen Sondheim's contribution to American musical theater is immeasurable and matched only by his immense generosity in influencing and mentoring new generations.” - ASCAP President Paul Williams in a statement.

“Thank you for giving us so much, Mr. Sondheim.” - singer and actor Adrienne Warren, via Twitter.

“Sondheim was singular. I was lucky to sing his music for “West Side Story.” Though he's gone now, his music will live on through the ages. There is and was no one in the world like him.” - actor and singer Russ Tamblyn.