Bieber not in pop star form at Prudential Center 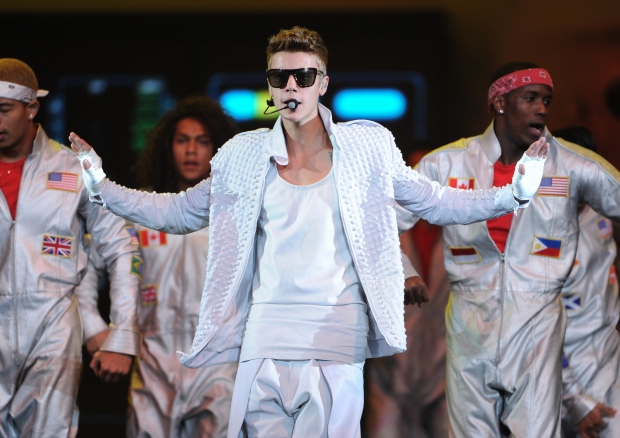 NEWARK, N.J. -- For all the negative publicity that's surrounded Justin Bieber in recent months -- the alleged drinking, smoking, spitting, fighting with a paparazzo and more -- he entered the stage at the Prudential Center in angelic form: In all white, he descended to the centre of the stage with wings on his sides as nearly 20,000 fans screamed at the top of their lungs.

These girls had Bieber Fever, and they didn't want to be cured.

They cheered on the 19-year-old, who kicked off his Wednesday night concert with the high energy, electro-flavoured songs "All Around the World" and "Take You." There were pyrotechnics bursting to match the tracks' sparkle, fan-made signs in every row and lights beaming from the cellphones capturing pictures and video. Bieber didn't have to move, and the arena would still have been in a frenzy.

The pop star took advantage of that during his 90-minute concert. During the opening up-tempo numbers, he seemed to be lip syncing and his sluggish, lazy dancing didn't match the oomph of the beats. Bieber was far better when he slowed things down, singing on grooves or mid-tempo tunes. But the multiplatinum singer is part of a group of contemporary acts who have a plethora of hits, but have not yet learned how to fully command onstage and truly connect with an audience.

Bieber phoned in a good amount during his show; at some moments, he even appeared bored. He was clocking in -- another day, another sold-out concert (Wednesday was Bieber's second night at Prudential).

When performing the hit "Beauty and a Beat," he couldn't keep up with his background dancers. He was lip syncing again -- much like a number of today's pop stars when trying to keep up with decent choreography. Though talented, Bieber isn't as good as Chris Brown, who also appears to lip sync but dances with clarity, precision and edge. During "She Don't Like the Lights," Bieber barely moved to the track's futuristic beat (maybe it was the leather tights?)

The Canadian singer was in better form when he sang R&B numbers and groovier jams instead of high-powered, dance-flavoured tunes -- much like his performance on his latest album, "Believe." He impressed when he warmed up his vocals before singing the soft "Catching Feelings" and he offered a singer-songwriter vibe during "Fall," where he also played guitar. While on the drums, Bieber was most natural, and during what feels like his life anthem -- "Never Say Never" -- he was confident as he sang the positive, inspirational lyrics to the crowd.

The singer's best effort was on "Die In Your Arms," which samples Michael Jackson's "We Got a Good Thing Going." His vocals were crisp and his dance moves slick, as he and six background dancers paid tribute with the throwback performance.

Throughout the night, videos of Bieber as a child played on the big screens. The images that stood out: A young Bieber playing the drums and singing in place.