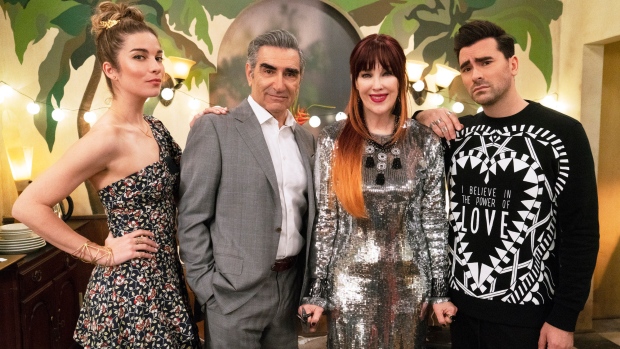 TORONTO - This year's leading Canadian Screen Awards nominees are a film featuring the walking dead and several series fans wish they could revive.

The zombie feature “Blood Quantum” is up for a leading 10 film awards at the awards show in May, while the now-defunct global smash “Schitt's Creek” is tops on the TV side with 21 nominations for its sixth and final season.

Montreal-based Jeff Barnaby wrote and directed “Blood Quantum,” which is competing for awards including best original screenplay and best actor for Michael Greyeyes.

The story of a plague that's infecting non-Indigenous people outside a fictional First Nations reserve struck an eerily timely chord when it hit on-demand and digital platforms last May, as the COVID-19 pandemic ramped up.

Barnaby said having an Indigenous zombie horror film and a sitcom with LGBTQ representation as the top nominees shows the diversity of the Canadian screen industry.

“I find it cool,” he said Tuesday in an interview after the nominations were announced.

“I'm always a little paranoid of seeing growth in an industry that has been cemented in its ways for so long. But seeing it get acknowledged like this does two things: It blows the doors off horror, which I feel like is our best export here in Canada, and Indigenous film as being a commercially viable commodity.”

The CBC show, about a formerly wealthy family who moved to a motel in a small town after losing their fortune, left the air last year with an ending co-creators Eugene Levy and Daniel Levy said they had designed for years.

It's up for Canadian Screen Awards including best comedy series and a slew of acting honours for the cast, including the Levys, Catherine O'Hara and Annie Murphy.

Two other series that also ended their runs in the past year - CBC's coming-of-age story “Trickster” and CTV's crime drama “Cardinal” - are tied for the second-highest amount of TV nominations at 15 each.

“Trickster,” based on a trilogy of novels by Eden Robinson, was cancelled after just one season this past January in the wake of controversy over co-creator Michelle Latimer's claims of Indigenous ancestry.

Its nominations include acting honours for Joel Oulette, who plays an Indigenous teenager dealing with family drama and supernatural scenarios, and Crystle Lightning, who plays his mom.

“I feel like the people and the actors, there's something that has been just ripped from us,” Lightning said of the show ending in an interview from her home in Edmonton on Tuesday.

“Talk about leaving people wanting more and so excited to have seen something so original and so groundbreaking, and then just to be taken away from them - and then us too, the actors, we're just like, 'No, it was so good!' So it's definitely bittersweet.”

“Cardinal: Until The Night,” the franchise's fourth and final season that ended last May, is up for trophies including best drama series and best lead actor and actress for Billy Campbell and Karine Vanasse.

The Academy of Canadian Cinema and Television will hand out trophies in 141 film, television, and digital media categories in a seven-part series of presentations streamed live from May 17 through May 20.

The best picture nominees include “Beans,” about a 12-year-old Mohawk girl coming of age during the 1990 Oka Crisis, and the Olympic Swimmer drama “Nadia, Butterfly.”

Also up for best picture is the psychological thriller “The Nest”; “Funny Boy,” about a Tamil boy who grows up gay in Sri Lanka during the deadly Tamil-Sinhalese conflict; and “Underground” (“Souterrain”), about a young man who works in mine that explodes near his hometown.

“Funny Boy” has the second-highest amount of film nominations with nine, including best director for New Delhi-raised, Toronto-based Deepa Mehta.

“Funny Boy” was originally Canada's submission to the Oscars race for best international feature film, but it failed to meet the academy's eligibility requirements due to the story's amount of English dialogue.

Its star, Saul Williams, is nominated for best actor for playing a Jamaican-raised partner in a Toronto cannabis grow-op who wants to end the operation but gets caught up in a violent deal.

Other best director contenders include Pascal Plante for “Nadia, Butterfly”; Sean Durkin for “The Nest”; Brandon Cronenberg for the sci-fi thriller “Possessor”; and Sophie Dupuis for “Underground.”

In the best comedy series category, the nominees include two more CBC shows that announced their series finales in the past year: “Baroness Von Sketch Show” and “Kim's Convenience.”

“Baroness” left the air after its fifth season last fall, with the comedy troupe saying it “felt like the right time,” while “Kim's Convenience” is set to wrap up for good on April 13 after producers said its co-creators were moving on to other projects.

“It's a really nice way to end our run, especially since our costume designer, Nicole Manek, got her first-ever nomination, and hair and makeup and wardrobe are such a huge part of sketch and such a huge part of our show,” said “Baroness” co-creator and star Jennifer Whalen.

In the best drama series category, the other nominees include Global's “Departure,” CTV's “Transplant,” History's “Vikings” and CBC's “Burden of Truth.” The latter two series have also ended their runs in recent months.

This is the second year in a row the Canadian Screen Awards are unfolding online due to the COVID-19 pandemic.

The livestreams for the ninth-annual awards will be available on the academy's website as well as its Twitter and YouTube channels. The presentations will honour last year's Special Award recipients, including Tina Keeper, Daniel Levy, David Suzuki, and the late Alex Trebek. A notable Canadian will narrate each presentation.

Academy CEO Beth Janson said she feels some elements of an online celebration can be “just as effective” as an in-person event.

But the Canadian Screen Awards help highlight nominees who suffer from a lack of exposure, and “coming together will remain really central” to what the academy does in the future, when it's safe to do so, she added.

“I think clearly awards shows are in crisis right now in general,” Janson said in an interview. “You look at the Golden Globes - a 60 per cent drop in ratings is not insignificant.

“But I think the Canadian Screen Awards serve a unique purpose. It is a celebration of excellence, for sure, but it's also often an exercise in discoverability for us.”

The 2021 nominations were chosen by members of the Canadian Academy and by nominating juries, conducted virtually with representatives from the film, TV, and digital media industries.

The membership will cast their votes between March 30 and April 16 to determine the winners.

The 2021 Canadian Screen Awards for sports will be handed out in July 2021, with nominees to be announced in June.

This report by The Canadian Press was first published March 30, 2021.