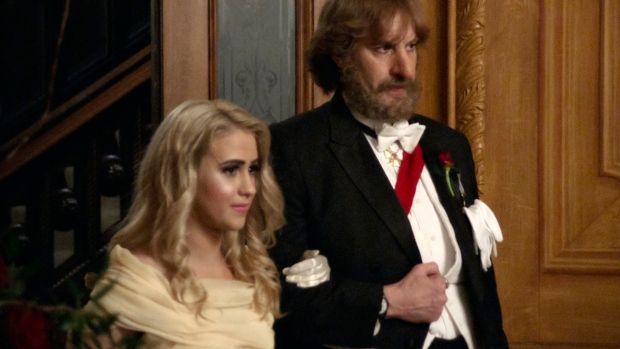 So what did YOU do at 5 a.m. after staying up all night for your prom? Maria Bakalova became a movie star.

The 24-year-old actress has been telling the story of how she had a few free hours after partying all night (she'd just gotten her diploma) and before shooting a movie in a remote spot in her home country, Bulgaria. She made a few audition improv videos with her phone and sent them off.

The project was so secret, Bakalova has said she actually worried she was being recruited for human trafficking. But soon she was in London auditioning for Sacha Baron Cohen to star in his “Borat Subsequent Moviefilm” as his yet-unknown 15-year-old daughter, Tutar.

Now Bakalova, living in Los Angeles, is the toast of Hollywood, nominated for a Golden Globe as well as a SAG award and Critics Choice award, and generating some Oscar buzz, too.

On the morning she heard about the Globes nomination -- a proud first for a Bulgarian -- an exhilarated Bakalova sat down for a Zoom interview, so excited that she had to calm down by reminding herself: “Be strong Maria, you're a strong Balkan girl!”

(Interview has been edited for length and clarity.)

AP: How are you doing?

BAKALOVA: No words to describe how grateful I am and how excited. Just no words. it's a mix of all of the emotions that you can imagine.

AP: How did you hear the news?

BAKALOVA: When they said it (on TV) I was without a reaction â€¦. complete blackout. “Is it real? Is it happening?” And I finally realized maybe 20 minutes later, “Oh, my God, it IS happening.” And with the company of all of these incredible actors that I've been admiring my entire life â€¦ and the people from Bulgaria, because it's the first nomination for an actor in the West. It brings hope and dreams to Bulgarians and to Eastern Europeans. I'm just super humbled and happy and grateful. And I cannot stop talking.

AP: This must be an amazing moment indeed for Bulgaria.

BAKALOVA: It is (crying). Be strong. Maria, you're a strong Balkan girl! We've been praying. We've been hoping. We've been dreaming. And now when it's happening and when we have the first step, it is something I hope we are going to keep developing and we're going to keep opening doors, because there are some really incredible artists from Eastern Europe, from Bulgaria.

AP: You've trained as an actor, but not in comedy. When did you realize you could be funny?

BAKALOVA: I didn't realize ... I mean, I think I'm a little bit awkward and weird as a person and the way that I'm behaving, with all of these gestures. But maybe the company of this master, Sacha Baron Cohen â€¦ having him next to me, supporting me, guiding me and being my mentor and teacher with this incredible script that was evolving every single day... I was lucky enough to have this team behind my back that believed in me, counted on me and supported me to find my funny sides. Because life is funny. When I think how small a period of time we have on this earth, it's actually funny!

AP: Have you spoken to Sacha?

BAKALOVA: Yes, I just wanted to hear him and to congratulate him, because Sacha is an unbelievable actor, not only in “Borat,” but in everything that he's been doing. And he's probably the person to whom I'm going to be forever grateful. And I wanted to hear him before even my Mom.

BAKALOVA: I did! And she cried for a second. But then she had this big smile because this is something with the temperament of our people from the Balkans â€¦ It's like a huge mix of emotions, we can cry, we can jump, we can smile, we can love. It's everything in one. She's super glad and happy and proud.

AP: It must feel strange to have this happen at such a dramatic time in the world.

BAKALOVA: I think everything is happening for a reason. And I'm happy that we have this really hard moment that is going to be hopefully soon history, the pandemic that we've all had to experience. Well, you have to live in these four white walls every single day for maybe almost a year. And we realize that we actually need each other, we are emotional animals. And we need to love, we need to be loved. We need to be around people. And I think that's one of the messages that we try to show in the movie, how we should treat each other equally with love and respect ... So I can see a meaning behind why this movie came in this moment in the world.

AP: Do you have a message for your home country?

BAKALOVA: I do and it is for my country, for your country. Is for every human being. Because it should not matter where you're coming from. It should matter who you are and what you stand for, what you believe in. We're here for such a small period of time and the world is going to keep going. So we really should love each other. We should support each other. We should be careful with our actions, with our thoughts, with our words that we're saying â€¦ And we should really should try to be better people and love each other more. And dream big and take the risk, we have nothing to lose. You might fall, of course â€¦ but if you jump, you might fly. So take the risk!