Calling all eccentric millionaires: 'Schitt's Creek' motel up for sale for $2 million 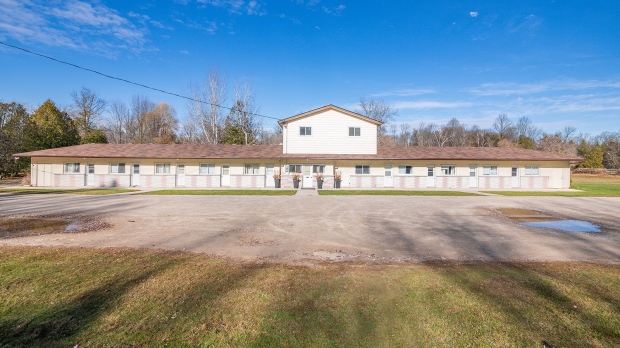 There's a rose-coloured opportunity for would-be hoteliers looking to flaunt their wealth in small-town Canada.

A landmark location from the beloved CBC sitcom “Schitt's Creek” hit the market Wednesday, offering buyers the chance to re-enact the show's riches-to-rags saga for a listing price of $2 million.

The Hockley Motel in Mono, a town of about 8,000 people northwest of Toronto, served as the exterior set for the Rose family's home on the Emmy Award-winning series.

The listing presents the 6.7-acre riverside property as a fixer-upper that would appeal to travellers seeking rural refuge from the commotion and contagion risk of city life in the COVID-19 era.

It's a sales pitch that may sound familiar to “Schitt's Creek” fans who have followed the Rose family as they refurbished their motel-turned-home in a town they once purchased as a joke, said property owner Jesse Tipping.

“The show obviously created a script that seems to be very fitting for the actual property,” said Tipping. “I hope (whoever buys it) can find that happiness that the Roses did on the show.”

In addition to its status as a stand-in for the Rosebud Motel, the property has appeared onscreen in the 2005 thriller “A History of Violence” and Netflix's superhero series “The Umbrella Academy.”

Tipping purchased the building in 2012 in hopes of using it as housing for athletes at the basketball academy he was starting at the time.

The sale has been in the works for about a year, and while Tipping is sad to part ways with the landmark, he admits he's a bit relieved that he'll no longer have to ward off “Schitt's Creek” sightseers.

Colliers Hotels says buyers who are interested in the property can put in offers until Dec. 14.