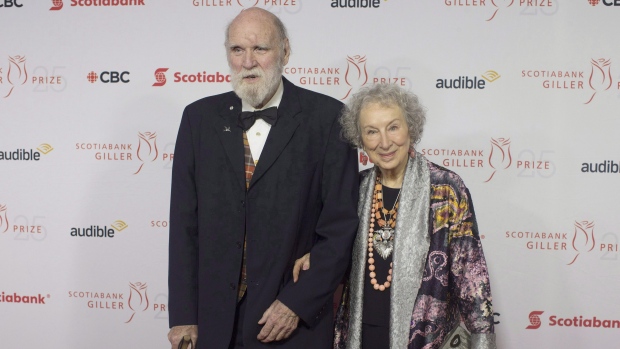 Margaret Atwood and Graeme Gibson stop on the red carpet at the Scotiabank Giller Bank Prize gala in Toronto on Monday, November 19, 2018. THE CANADIAN PRESS/Chris Young

TORONTO - Celebrated Canadian author and conservationist Graeme Gibson is being remembered as a force to be reckoned with, on the page and in his activism.

Gibson's publisher, Penguin Random House Canada, said the 85-year-old died on Wednesday at a hospital in London, U.K., where his spouse, author Margaret Atwood, was promoting the release of “The Testaments,” her sequel to “The Handmaid's Tale.”

In a statement, Atwood said Gibson was suffering from dementia and feared further decline, and his family was grateful he had the “swift exit” he wanted.

“He had a lovely last few weeks, and he went out on a high, surrounded by love, friendship and appreciation,” said Atwood, who has cancelled several dates on her book tour.

“We are grateful for his wise, ethical, and committed life.”

Born in London, Ont., on Aug. 9, 1934, Gibson studied at the University of Western Ontario.

Gibson deviated from this approach in 1982's “Perpetual Motion,” in which he explored the human desire to dominate the natural world. Eleven years later, he published “Gentleman Death,” centring on a writer confronting his own creativity and mortality.

Gibson was passionate not only about writing, but supporting other writers, said friend John Ralston Saul.

“He played such an important role in so many of our lives, in the life of Canadian writers,” said Saul a two-term president of PEN International.

“It's very important just to realize the role that Graeme played in galvanizing that community and giving it a kind of a shape and sense of itself and where it could go.”

Gibson co-founded several organizations that support Canadian writers, including the Writers' Trust of Canada; the Writers' Union of Canada, which he chaired from 1974 to 1975; and PEN Canada, serving as president from 1987 to 1989.

Saul said Gibson was just as dogged in his environmental advocacy.

An avid birdwatcher, Gibson was a council member of World Wildlife Fund Canada and chairman of the Pelee Island Bird Observatory.

“When he identified an ethical issue, he would just stand for it and go to the end,” said Saul.

“A lot of people out there will remember Graeme for something that he did to make other people's lives possible or better.”

Atwood was Gibson's partner in many of these literary, nature-loving and activist pursuits.

Peter Raymont, who is co-directing a documentary about the couple, said Gibson always brought out the “fun-loving side” of Atwood.

“Seeing them together was so lovely - them giggling together like teenagers,” said Raymont. “We were really honoured to witness the love between them both.”

For the past several decades, the two shared a home in Toronto. They also spent several years on a farm in rural Ontario, but decided to move to the city to spare their daughter, Jess, a two-hour commute to school.

Gibson also had two sons with Shirley Gibson, with whom he divorced in the early 1970s.